The new skinny on leptin

Leptin — commonly dubbed the "fat hormone" — does more than tell the brain when to eat. A new study by researchers at The University of Akron and Northeast Ohio Medical University (NEOMED) shows that leptin may play a role in hearing and vision loss. This discovery, made in zebrafish treated to produce low leptin, could ultimately help doctors better understand sensory loss in humans. 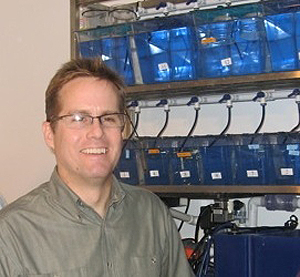 Dr. Richard Londraville, professor of biology, pictured in his zebrafish laboratory, discovered, with colleagues, a link between the hormone leptin and sensory loss.

While the scientists expected the leptin-deficient fish would be unable metabolize fat, "we did not expect that the leptin also affects the development of sensory systems," says Richard Londraville, UA professor of biology.

"We discovered that leptin influences the development of eyes and ears in fish," says Londraville, explaining how the popular hormone of study (the subject of about 30,000 reports since its 1994 discovery) also controls body temperature, immune function and bone density. The hormone's newly discovered impact on the sensory systems of fish draws renewed interest to previous leptin research on mice, Londraville says. These studies revealed that leptin loss also affects eye and ear development in mice.

Published in the Sept. 15, 2012, General and Comparative Endocrinology journal, "Knockdown of leptin A expression dramatically alters zebrafish development" explores leptin's evolution, or what it used to do, to provide clues to its impact on humans. The research was led by UA Professor of Biology Dr. Qin Liu, a leading expert on the technology that allowed leptin manipulation of the zebrafish.

"There is some evidence that leptin deficiencies in fish likely have the same effect on humans, so this may be pointing toward something more widespread than we thought," Londraville says. "Perhaps more research should be spent on the sensory effects of leptin, which hasn't received much attention."

Londraville and his research colleagues will further their research, which was initially launched with a $250,000 National Institutes of Health grant. The team was granted an additional $435,000 in NIH funding, which they will use over the next three years to study how leptin is controlled differently in mammals and fish and the resulting consequences.