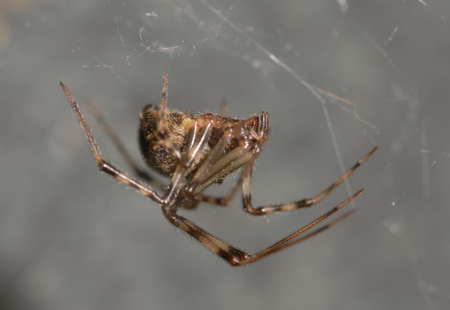 The common house spider, Achaearanea tepidariorum, performs the uncommon feat of producing two different adhesive strengths with one glue. Photo courtesy of The University of Akron.

While the common house spider may be creepy, it also has been inspiring researchers to find new and better ways to develop adhesives for human applications, such as wound healing and industrial-strength tape. Think about an adhesive suture strong enough to heal a fractured shoulder and that same adhesive designed with a light tackiness ideal for "ouch-free" bandages.

University of Akron polymer scientists and biologists have discovered that this house spider — in order to more efficiently capture different types of prey — performs an uncommon feat. It tailors one glue to demonstrate two adhesive strengths: firm and weak. Released today by Nature Communications, a study by the UA scientists shows that cobweb spiders use adhesive discs to anchor webs to ceilings, walls and various other surfaces. While they use the same glue on all surfaces, they create it using two different designs to give it a strong or weak grip, depending on whether its prey is flying or crawling on the ground.

The researchers who made the finding are already working toward developing a synthetic adhesive that mimics this intelligent design strategy employed by the house spider.

"We were intrigued by how cleverly spiders use silk to create a beautifully multifaceted adhesive and how they do so with very little glue," says researcher Ali Dhinojwala, UA Department of Polymer Science chair and Morton Professor of Polymer Science "It teaches us how to take something minimal and make the most of it — how to design an attachment to hold things together in unique ways." 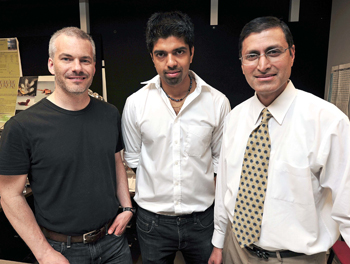 Vasav Sahni, a recent Ph.D graduate from the UA Department of Polymer Science and currently a senior research engineer at The 3M Co., uses the comic book super hero, Spiderman, as an example. "When Spiderman jumps from one building to another, he throws a thread that sticks to a building and then he jumps. The thread has to be very strong and also equally sticky — sticky enough to support him," Sahni says.

The strong adhesive attachment that holds the strand of threads that the fast-moving Spiderman uses to spring to a building doesn’t lose its grip. Likewise, cobweb spiders use a "staple-pin" adhesive disc to keep their webs' dragline silk threads attached firmly to ceilings and walls. Conversely, the "dendritic" adhesive discs that mount gumfoot silk threads to the ground do so with a loose grip.

"When we made the discovery of the gumfoot adhesive disc that binds cobwebs lightly to the ground and compared it to the scaffolding adhesive discs, which attach cobwebs very firmly to walls and ceilings, we thought, 'How is this spider using the same glue to design both a weak and a strong attachment disc,'" Sahni says.

"What we have also discovered is a key design principle," Sahni says. "It's not a question of the inherent chemistry of the glue, but how the same glue can have different degrees of adhesion."

Todd Blackledge, professor and Leuchtag Endowed Chair in UA's Department of Biology at UA, explains that the differences in the two types of discs arise purely from the spider's spinning behaviors, because both are built from silk from the same sets of glands.

Sahni says the design principles could result in the development of synthetic adhesives, particularly for biomedical applications.