African starlings: dashing darlings of the bird world in more ways than one 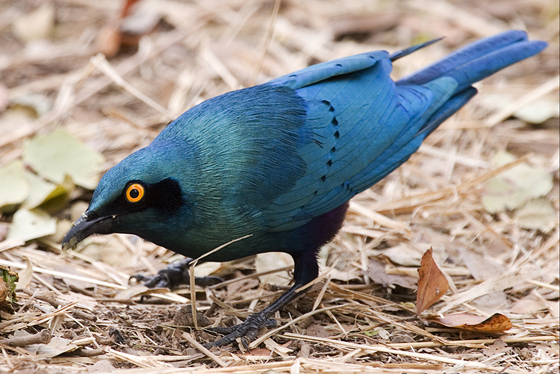 The Greater Blue-Eared starling is part of a remarkably adaptable species of birds known as the African glossy starlings. — Photo credit: Paul Barnard, a nature photographer in South Africa.

It's not going to happen while you're peering through your binoculars, but African glossy starlings change color more than 10 times faster than their ancestors and even their modern relatives, according to researchers at The University of Akron and Columbia University. And these relatively rapid changes have led to new species of birds with color combinations previously unseen, according to the study funded in part by the National Science Foundation and published today in the Proceedings of the National Academy of Sciences USA.

"Many people enjoy bird watching because of all the different, beautiful colors of feathers, but this study gives us a closer look into the story of how these colors came to be, and how they changed over their millions of years of evolution,” says Rafael Maia, the study's lead author and a graduate student in the Integrated Bioscience program at UA.

Just like bar cruisers who don flashy clothes before a night out, birds use feathers to attract the opposite sex and intimidate the competition.

"The feathers aren’t just there for flying," Maia says. 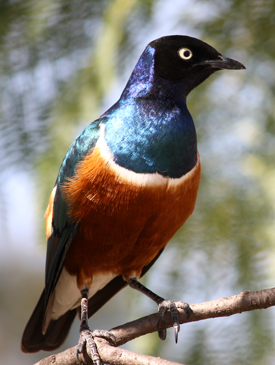 This Superb starling is part a species of birds known as the African glossy starlings. — Photo credit: Sarah Guindre-Parker of Columbia University.

The team of scientists used analysis of microscopic feather structures, spectral color analysis and evolutionary modeling to analyze patterns of evolution in African starlings, a diverse group of primarily brightly colored birds known for their metallic sheens. (By comparison, the European starling – the only starling found in the United States – is a drab creature.)

The researchers focused mainly on the different forms of feather melanosomes, the parts of cells (organelles) that carry the dark pigment melanin. Melanosomes are found in all vertebrates and most typically show up as black, brown or gray. But in birds, melanosomes are sometimes organized in a way that interacts especially with light to create colorful, metallic and often iridescent feathers. The melanosomes of the African starling groups evolved to become especially suited to react with light of various wavelengths, according to the researchers.

The ancestors of today's starlings reached Africa about 17 million years ago. Back then, most likely had simple, rod-like melanosomes that are found in most bird species, according to the study. As the ancient starlings of Africa started to split into new species, new melanosome types began to emerge. Some species retained the ancestral rods, while others shed them for one of three unusual forms of melanosomes: hollow rods, solid flattened rods and hollow flattened rods.

Some of the nearly 10,000 species of birds in the world also have some of these modified melanosomes, but – as a group – African starlings are the only birds to have all four types among them.

"With the appearance of these new shapes comes new ways of interacting with light, and a whole range of colors that these birds could never have made before can now be produced in their feathers," says Maia.

These African Starlings didn't just leave their simple bland relatives behind slowly. When they took on the new melanosome types, they began to sport spiffier plumage more than 10 times faster than their kin. 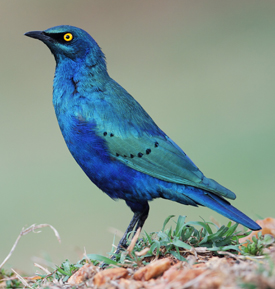 Another view of the Greater Blue-Eared starling, which is part of a remarkably adaptable species of birds known as the African glossy starlings. — Photo credit: Nick Athanas of Tropical Birding.

"Evolving these new melanosomes was like inventing the wheel for these birds — it allowed starlings to reach new colors at an incredibly fast rate," says Matt Shawkey, co-author of the study and UA associate professor of biology and integrated bioscience.

Similar key evolutionary patterns have been found in the jaws of African fishes and the beaks of finches that allow them to adapt rapidly to explore new food sources. But it's not quite the same, the researchers says.

"Bright colors don't help you get a meal – and they certainly don't help hide you from a predator,” says Shawkey.

"Feather coloration is very important in African starlings because it is used to signal quality and dominance when competing for mates," says study co-author Dustin Rubenstein, assistant professor in the Department of Ecology, Evolution and Environmental Biology at Columbia University in New York. They help establish dominance and rank in females and males, an earlier Rubenstein study showed.

"And since birds of a feather flock together and all that," says Shawkey, new colors may enable new social groups to form quickly and halt breeding with the rest of the population. Alternatively, bird populations may diverge because of physical barriers such as mountains, and new colors may help keep them separated when the two populations meet again. Either of these processes could lead to the birth of a new species, and may explain why the more colorful starlings, with modified melanosomes and their fast-evolving color palette, also form new species more readily.

"Like some other classic evolutionary innovations, these elaborate ornaments seem to have promoted diversification at a relatively fast rate," says Maia. "However, they do so not by allowing you to eat something new, but just by changing your look."

The study was supported by the National Science Foundation, Human Frontiers Science Program, Columbia University, Sigma Xi, the American Museum of Natural History and The University of Akron.

National Geographic: On the Origin of Really Shiny Species