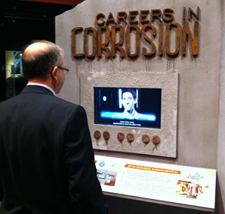 Here is the interactive educational exhibit created by UA and the Department of Defense.

When President Barack Obama cited the nation's 70,000 structurally deficient bridges in his State of the Union address last month, The University of Akron already had one solution to the problem: corrosion engineers.

Now, a new partnership between UA, the Department of Defense, and the National Center for Education and Research on Corrosion and Materials Performance (NCERCAMP) housed at the University, will inspire the next generation of rust-busting corrosion engineers through an interactive educational exhibit that debuted at the Orlando Science Center in Florida on March 16.

On hand for the ribbon-cutting were 13 UA corrosion engineering students, who will be awarded $38,000 in scholarships during the National Association of Corrosion Engineers (NACE) International Corrosion Conference in Orlando on March 19.

As visitors to the display stand under a 200-square-foot, rusty steel trestle bridge, they move through a series of virtual experiences that depict how corrosion occurs and the scientific “fix” now under development at The University of Akron, which offers the nation's first bachelor's degree program in corrosion engineering. 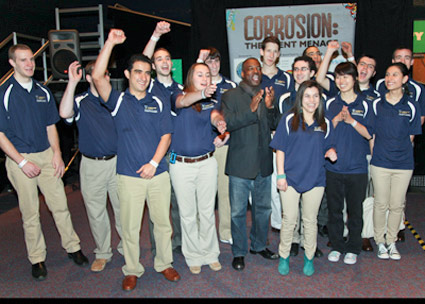 Actor LeVar Burton is surrounded by UA's corrosion engineering students at the March 16 opening of the exhibit. They will be among the first in the nation to earn bachelor’s degrees in the discipline. Burton, who narrated the multimedia aspects of the exhibit and is an advocate of STEM education, cut the ribbon at the exhibit. Photo: Bruno White Entertainment, Inc.

Among the exhibit's engaging components is a video game experience, which uses kinesthetic gaming "Corr Sim Jr." to give children the opportunity to become corrosion-prevention technicians and keep their bicycles free of rust.