In some quarters, community and pro bono publico (“for the public good”) service during law school is viewed as nice to do but consuming time that could be better spent studying, doing an internship or searching for a job. 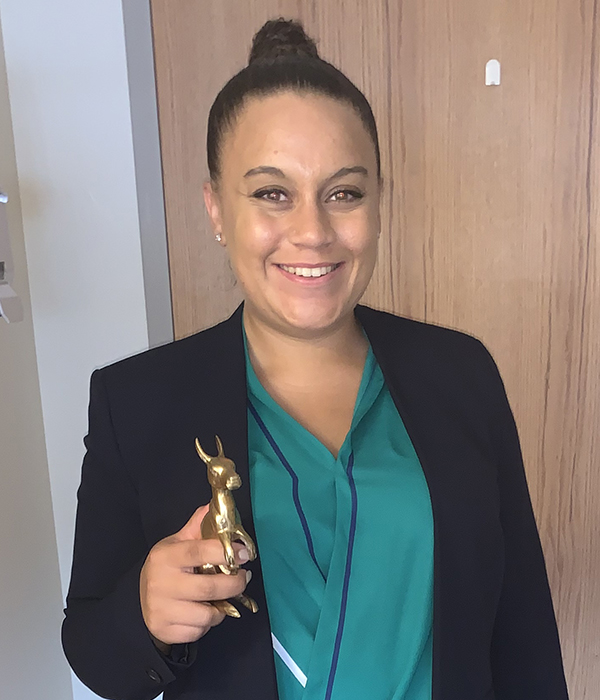 That is definitely not the view at The University of Akron (UA) School of Law, where the class of 2020 logged a record 16,489 hours of community and pro bono service over the course of their law school years. And it was definitely not the experience of individual graduates such as Dezerae Albert, who found her 311 hours of community and pro bono service invaluable, especially her service in the Inmate Assistance Program at the Mahoning County Jail through the school’s legal clinic.

“I can’t express how much my experience at the jail helped me in my career. I use the skills I learned there every day in my job at the Summit County Legal Defenders Office,” she said.

“When I entered law school, I was 100% set on being a prosecutor. But once I started at the jail, I realized how much a prosecutor doesn't get that aspect of being able to actually sit down and talk with the people they're prosecuting and learn who they are as a person. Within a month of working there I just shifted over to that side of things.”

Albert is one of 36 members of the class of 2020 who will be recognized by the Ohio Association for Justice for achieving 150 or more hours of service during their time in law school. The graduates will each receive an Ohio Access to Justice Award certificate and a cover letter signed by both Ohio Supreme Court Chief Justice Maureen O'Connor and the Ohio Access to Justice Foundation’s board president, Kimberly C. Shumate. Recipients who go on to pass the Ohio bar exam will also be recognized for their service at the swearing-in ceremony.

The School of Law held its own Student Pro Bono Awards Recognition ceremony via webcast on May 21, with congratulatory remarks offered by Ohio Supreme Court Justice Judith French, UA President Gary L. Miller and Mrs. Georgia Nix Miller, and School of Law Dean Christopher J. (C.J.) Peters. A recording of the ceremony may be viewed on the Pro Bono at Akron Law webpage. In addition, the 26 graduates who completed at least 300 service hours will be honored with special cords at the law school commencement ceremony.

“The entire class of 2020 has much to be proud of in terms of community and pro bono service,” Peters said. “The class total of 16,489 hours is the highest of any class since we implemented the pro bono service requirement. That works out to an average of 108 hours per student.”

Although virtually every U.S. law school encourages students to engage in pro bono and community service, UA’s School of Law is one of only about 40 that require a minimum number of pro bono service hours as a condition for graduation.

“We implemented the requirement to ensure that every law student experiences the benefits of pro bono and community service, to promote their future pro bono involvement as practitioners, and to provide direct knowledge of the plight of persons of limited means and their access to justice,” Peters said. “I really can’t recall a graduate who didn’t say they valued the experience.” 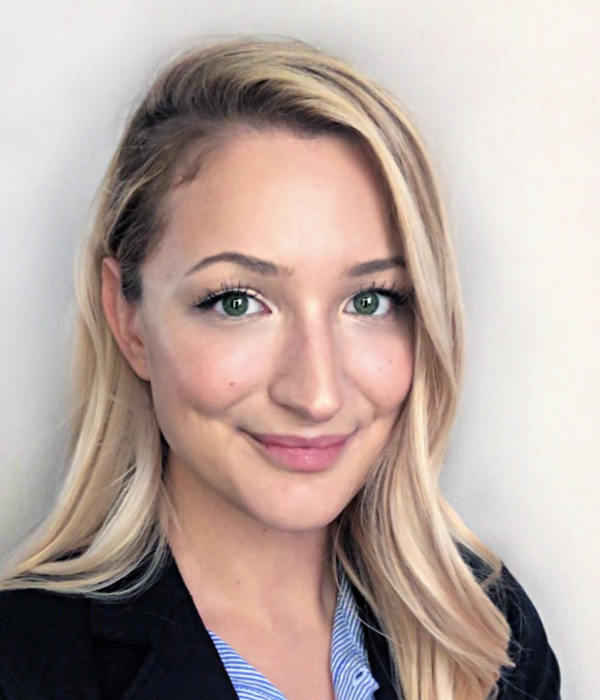 No student in the class of 2020 was more devoted to community service than Christina Bass. For providing 1,068 hours of service during her time in law school, Bass was recognized as Akron Law’s Community and Pro Bono Publico Service Student of the Year.

Most of her service hours were contributed during her year as an AmeriCorps VISTA national service volunteer at the County of Summit Alcohol, Drug Addiction and Mental Health Services Board (ADM). Her accomplishments there included developing strategies to target gaps in the provision of services, advocating for educational training on parity law, assisting in making the ADM website ADA-compliant, and creating $20,000 worth of mini-grant opportunities for targeted prevention.

“The AmeriCorps volunteer program was something that I had wanted to do for a really long time, and there just really was never the right opportunity,” she explained. “Then in 2019 I was recruited for the position at the ADM Board. It was really random. Since it was my last year in law school, I thought this was the best opportunity I was going to have. It meant I had to give up a job at a startup medical device company that paid pretty well, and that was scary, but I had always wanted to do this.”

As a law student, Bass concentrated on health law and earned her Health Law Certificate.

“A lot of times what we were learning in classes overlapped with what I was doing at ADM. I also was able to go to the county drug court and the domestic violence court, which Judge [Joy] Oldfield and Judge [Kathryn] Michael oversee. They also teach at the University, so it was cool to see them in action,” she said.

With a goal of someday leading a nonprofit organization in the health care field, Bass has laid the groundwork for her career with her pro bono experience at ADM, her Certificate, and her law degree.

“I absolutely think my law degree will help me in my career, in health law and with management tactics and business structures. In so many ways the law is integral to really anything that you do.”

Nicole Coulter’s 491 hours of community and pro bono service was the third highest in the class of 2020. The largest portion of that time was spent in the health and education department at Community Legal Aid the summer after her first year.

“I thought that I was interested in health law, but I didn't know for sure, so I wanted to get some experience,” she said. “We helped a lot of families, whether it was housing issues or kids who needed to get into certain classes or have certain resources made available to them at their school.”

That summer at Community Legal Aid, combined with later volunteer work with a church-based program that provides support and activities for girls ages 11 to 18, confirmed Coulter’s inclination to pursue a career in health law. She graduated with a Health Law Certificate and hopes to start out working at a law firm after the bar exam.

I know there are quite a few firms in the area that have health law practices,” she said. “My goal is to work in-house at a hospital, but I need a bit of experience before I can get one of those jobs.” 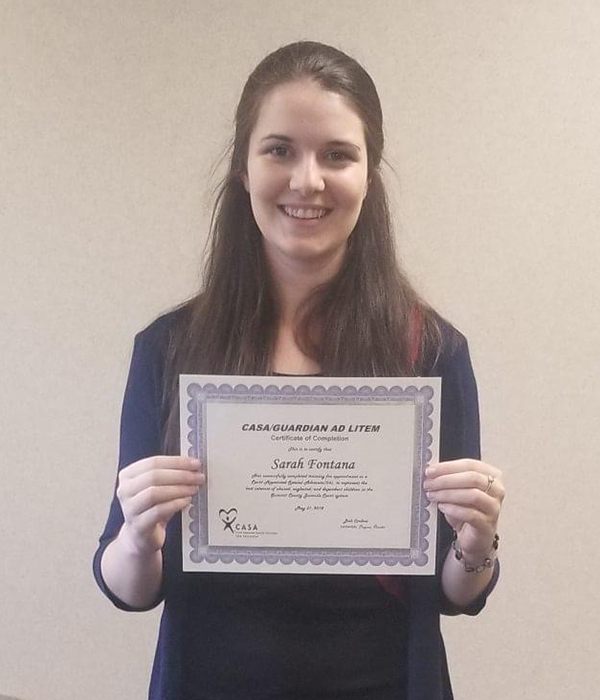 “The public service focus at Akron Law was one of the reasons I chose to go there,” said Sarah Fontana, who completed 300 hours of community and pro bono service during her law school years.

Her initial experience was at the International Institute of Akron, a nonprofit organization providing refugee resettlement and legal services for immigrants. She started there after finishing her first semester of law school, which is earlier than most students start.

“I wanted to have some legal experience on my resume when I began applying for internships,” she said. “I found myself actually sitting down face-to-face with a client on my first day. Classroom instruction is awesome, but it was cool to see these immigration issues unfolding in real time and watch how the attorneys made decisions.”

Fontana contributed additional pro bono hours as a Court Appointed Special Advocate (CASA) in the Summit County Juvenile Court. A CASA advocate represents the best interests of individual children in the juvenile system. The work included researching, writing reports, and sometimes testifying in court if there was a custody dispute.

These pro bono experiences also paid off in the classroom and in her career plans.

“By the time I took immigration law my 2L year and family law my 3L year, I had a decent amount of experience in those two areas that was really helpful,” she said. “As for my career, I am open to a lot of different things. I really liked working in immigration law at the International Institute, and I've been working in criminal law, and that's also been awesome.”