The University of Akron's storied athletics history dates back nearly 130 years. Now, 17 intercollegiate sports strong and with more than 300 student-athletes, the Akron Zips are into their third decade of Mid-American Conference membership and poised for academic and competitive growth.

One of the more memorable nicknames in intercollegiate athletics — the Zips — belongs to The University of Akron.

In 1927, a campus-wide contest was conducted to choose a nickname for the University's athletic teams. Student Margaret Hamlin suggested "Zippers," which was also the name of a popular rubber overshoe sold by Akron's B.F. Goodrich Co. In 1950, then-athletic director Kenneth Red Cochrane shortened the nickname to the "Zips." 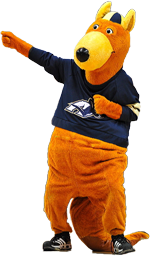 The evolution of Zippy, The University of Akron’s mascot, began 54 years ago when the student council, under president Dave Frye, decided the University needed a mascot.

“Zippy” the kangaroo was officially declared UA’s mascot on May 1, 1953. Dick Hansford, UA student council adviser, recommended the kangaroo, and it was approved by the council.

The first known printed reference to the mascot as “Zippy” was a 1965 Zips football press brochure. The Buchtelite's first use of the name “Zippy” came Sept. 24, 1965, under a photo of the cheerleaders listing “Mascot - ‘Zippy’ - Charles Huettner.”