In 2004, the U.S. presidential election hung on the outcome of Ohio’s electoral votes. Ohio, much like Florida and Pennsylvania, is one of the perennial battleground states and the winner of Ohio usually has a lock on the White House. Ohio’s place as a bellwether for the nation is not new but it is unique. There are, as we will show, few states that mirror national trends as accurately. The key question is whether this special status will remain in the future or if demographic, economic and cultural shifts lead to a displacement of Ohio as the nation’s premier swing state.

In this post, we  compare Ohio’s voting in presidential, congressional and gubernatorial elections to the nation as a whole and to some other key battleground states.  Ohio’s political history can be usefully divided into four fifty-year periods: the Foundation era, 1803-1852; the Civil War era, 1853-1903; the Industrial era, 1903-1953; and the Postindustrial era, 1953-2003. These categories imply a fifth contemporary era (beginning in 2003), which will be the primary focus of most of Buckeye Battleground. Of course, it is far too early to determine the political characteristics of this new era, especially four decades into the future.

Although crude, the four historical periods cover major developments that influence Ohio elections in the contemporary era. Here a geological metaphor is useful, with each of the four previous eras representing a layer of political “sediment” on which subsequent developments rest. Much as layers of sediment eventually harden into layers of rock, time has solidified the earlier political developments in the state. The more distant political developments serve as the “bedrock” of Buckeye politics, having important but less direct influence on present-day elections. Meanwhile, the more recent developments are less solid but more directly relevant to contemporary and future elections. The choice of Republican ballots for this comparison reflects a special feature of Ohio politics: the Buckeye battlefield has tended to vote slightly more Republican over this period of history. For example, since 1856 the Buckeye State has on average voted 50.6 percent Republican in presidential elections compared to 48.1 percent for the nation as a whole, a modest advantage of 2.5 percentage points.

In fact, Ohio’s record is perfect when it comes to electing Republican presidents: no Republican has ever reached the White House without carrying the Buckeye State. In all five cases when Ohio failed to vote for the presidential winner since 1856, it was because Ohioans favored the Republicans’ candidate but the Democrat won the White House. This has happened only twice since 1900.

Figure 1.1 illustrates this pattern by reporting the fifteen most competitive states, measured by the mean margin of victory in the 2004 and 2008 presidential elections (that is, the difference between the major party winner and loser). All these states showed an average margin of victory of 10 percentage points or less in the elections won by Republican George W. Bush and Democrat Barack Obama, with the states listed in declining order from the largest to smallest margin. Most analysts would agree that a victory of 10 percentage points or less constitutes a competitive election. 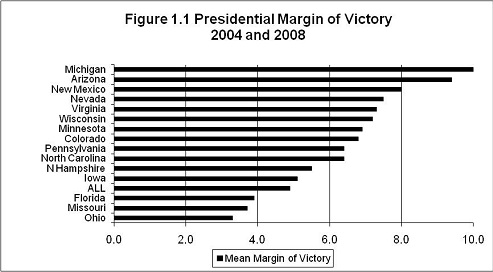 It turns out this has almost always been the case. As it is often pointed out, no Republican has ever won the presidency without winning Ohio, but over time, Ohio’s vote is a fairly good predictor of the national vote. Figure 1.2 plots the percent of the total presidential vote cast for Republican candidates nationally (dashed line) and Ohio (solid line) from 1856 to 2008 (minor party ballots are included in the calculation). Florida is included for purposes of comparison (dotted and dashed line).

This figure reveals the modest partisan bias of Ohio alluded to before: the Buckeye battleground has tended to tilt slightly toward the Republicans over this period of history. For example, since 1856 the Buckeye State has on average voted 50.5 percent Republican in presidential elections compared to 48.0 percent for the nation as a whole, a modest advantage of 2.5 percentage points. By comparison, Florida has been much less Republican, at 35.6 percent. The GOP bias of the Buckeye battleground can be seen in the slightly higher GOP vote in good Republican years (such as 1904, 1928, 1956, and 1984) than the national vote--but also in good Democratic years (such as 1912, 1936, 1964, 1992, and 2008). So, one explanation for the Ohio-GOP link is that Republicans usually do well in Ohio and when their presidential candidates do well nationwide, then they are also likely to win Ohio.

Ohio is less “red” than it used to be.  The Republican advantage at the polls has declined over time: the average GOP presidential vote was 51.6 percent in the Civil War era (for a 3.8 percentage point advantage); 50.1 percent in the industrial era (a 2.7 percentage point advantage); and an even 50.0 percent in the postindustrial era (a 1.0 percentage point advantage). (The Ohio presidential vote was closely associated with the national vote in the foundation era as well.) Thus, Ohio became more evenly divided in the partisanship of its vote even as it lost population and electoral votes. Alternatively, Florida (and the “new” South overall) had become more Republican than Ohio by the postindustrial era (52.5 percent). Indeed, John McCain’s 46.8 percent in 2008 was far below the historical performance of his party. However, both of these figures closely resemble the national vote in 2004 and 2008, respectively. Of course, this suggests the continuing importance of Ohio as a battleground state.

What about state elections? Figure 1.4 plots the Republican gubernatorial vote for Ohio and the nation from 1855 (when the first Republican ran for governor in the Buckeye State) to 2010.

Overall, Ohioans voted 49.4 percent Republican for governor, compared to 45.0 percent of the national electorate (4.4 percentage point GOP advantage). The Republicans did best in the Civil War era (50.7 percent) and less well in the industrial (47.4 percent) and postindustrial (47.6 percent) eras. Republican Ken Blackwell’s 37.6 percent in 2006 was far below the performance of previous GOP candidates, while John Kasich’s 49 percent was more typical.

The Ohio gubernatorial vote is not as closely associated with the national gubernatorial vote. In this regard, the gubernatorial vote resembles the U.S. Senate vote--a pattern that makes intuitive sense given that both offices are elected statewide and not always in presidential years. Not surprisingly, Ohio has been a poor bellwether in predicting the partisan control of the nation’s state houses, matching the national result only about one-half of the time since 1855.

The party control of the Ohio governorship has changed across the eras. In the Civil War era, the GOP won 72 percent of gubernatorial elections (or 84 percent if the Civil War Unionist governors are counted as Republicans), but then just 33 percent in the industrial era. (The foundation era resembled the industrial era, with alternatives to Democratic candidates also winning about one-third of the time.) However, in the postindustrial era the GOP won 60 percent of the gubernatorial contests. In the contemporary era, both parties have won a gubernatorial contest.

Will Ohio remain a battleground? According to the 2010 Census, Ohio barely gained population (+1.6%) compared to the national average of +9.7% and an average of +3.9% for the Midwest as a whole. In fact, since the 1970s, Ohio has had nearly flat population growth.  Ohio’s clout in the Electoral College is beginning to decline. For example, in the Civil War Era, the Buckeye State averaged 23 Electoral Votes, 25 in the Industrial Era, and 23 in the Post-Industrial Era. The largest number of Electoral Votes occurred after the 1930 and 1960 censuses (26), but Ohio’s 20 Electoral Votes in 2004 were the lowest since the 1820 Census (16). Now, after the 2010 Census, Ohio will lose two more congressional seats and will not have just 18 Electoral Votes (since a state’s Electoral Votes equals the number of U.S. Senators (always two for every state) plus the number of U.S. Representatives).

On the other hand, as noted above, only Florida really matches the Buckeye State as a large competitive battleground. Pennsylvania also lost two seats and Michigan actually lost population. Moreover both states are probably solid blue states headed into the 2012 election. Other large states such as Texas, Illinois, California and New York have not been competitive in some time.  North Carolina and Virginia have gained Electoral Votes, but it is not clear if they will be competitive in 2012 since Obama’s win in these southern states marked a significant departure from their historical Republican support that traces back over four decades.  So, Florida is perhaps the largest contested prize in a presidential election, but Ohio remains both large and competitive.  In sum, the Buckeye State remains a key national bellwether and is likely to retain this status for at least one more decade.