Just as nationwide, it has been a bumpy ride the last few years for both parties. In 2004, Republicans controlled nearly all of state government just as Republicans nationwide controlled the presidency as well as the House and the Senate.  But, by 2006, Democrats regained control of Congress and in Ohio, nearly swept statewide elections and picked up a federal senate seat.

In this post, we examine two main factors that explain the volatility of Ohio’s elections in recent years: individual partisanship and perceptions of economic performance. The importance of these factors in structuring not only voting decisions, but indeed assessment of objective factual information is hard to overstate.

The Importance of Party Affiliation

Millions of citizens vote in elections, but in reality election analysts do not really need detailed information on each and every voter to gain a fairly reliable predictor of how people will vote. Certainly, citizens often have numerous preferences to choose from, arising from their class, cultural or lifecycle status, and/or from the region in which they live. From election to election, the candidates and issues change so election outcomes represent a complex set of forces resulting in one candidate winning and another losing.

Most American elections represent a fairly simple choice between two candidates, one of which is a Republican and the other which is a Democrat. As it turns out, most citizens are either Republicans or Democrats as well, and this factor alone accounts for most of variance voting from person to person (for the moment we are putting aside the question of what makes someone a Republican or a Democrat). Partisanship is typically the most powerful political attitude when it comes to understanding the vote, tying together the effects of other attitudes, demography, and region. In fact, although many Americans proclaim political independence, in reality, the overwhelming majority of the public identifies with one of the parties and this self-identity is highly stable across a person’s lifetime. Furthermore, it has become especially important in recent times due to increased political polarization. In fact, split ticket voting has declined substantially and voters appear to be more polarized today along partisan lines than they were a generation or two ago.

The thing about partisan affiliation is that it is highly stable. Generally, sometime between the ages of 18 and 25, most citizens pick a favorite team, so to speak, and it doesn’t change much from then on. During this time, the importance of generational or historical events, individual social and economic situations, personality traits and even biological factors work to lay the foundation during this important time period. Party affiliation becomes a person’s “standing decision” and serves as an important part of a person’s public identity.

Figure 3.1, however, may lead some to question these assertions. In a relatively short time frame, the balance of Republicans and Democrats doesn’t appear so stable. In 2004, Republicans held a narrow advantage with over 40 percent of Ohioans affiliating with the GOP compared to about slightly under 40 percent identifying as Democrats. By 2008, Democrats had opened a 15 point advantage and then saw this advantage disappear by 2010 with a sizeable increase in the proportion of independents, although it should be noted that at most only one in four voters are independents. 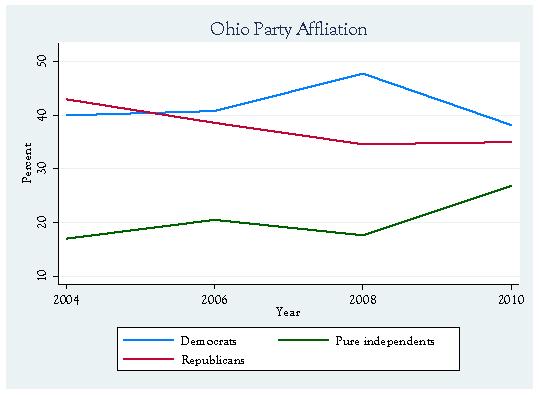 Some of this change is most likely to be due to sampling error (in other words, when we take samples, we can only estimate the real proportion in the population; in this case, the sample is split into different groups and so the margin of error for each group of partisans is large enough that changes might be an artifact of sampling).  The patterns, though, make sense, so in all likelihood, there is real change occurring at the aggregate level.  Our polling is backed up by other national polls showing similar patterns. As seen in Figure 3.2, the differences in mass partisanship also helps to explain the importance of the Five Ohios. Northeast Ohio is the most Democratic region because there are far more Democrats than Republicans or Independents; while Southwest Ohio is the only region with a plurality of voters identifying as Republicans. The other regions also evidence greater instability with the rise in independents concentrated in Central and Northwest Ohio. 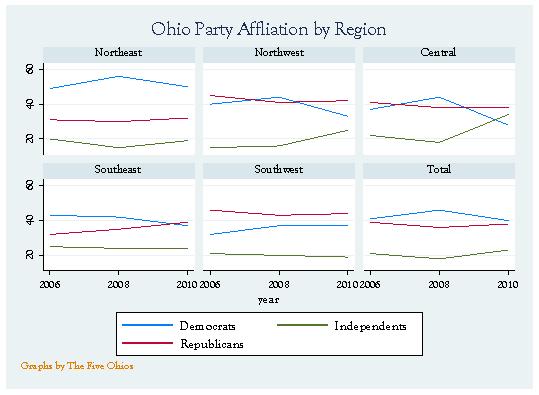 These changes matter greatly. First, party is now strongly associated with ideology. In our 2010 pre-election survey, for example, we found that 68 percent of Republicans were conservative compared to just about 15 percent of Democrats. Independents were more evenly split with 70 percent calling themselves moderate or having an ideology other than liberal or conservative.

As Figure 3.2 shows, in any given election, about 90 percent of partisans vote for their parties’ candidate. In 2004, the Bush team focused on mobilizing soft Republicans that did not turn out in 2000. Combined with the plurality in identification in that the GOP enjoyed, this helped to carry the state in 2004. Note, however, that a similar performance in 2008 when again Republicans voted for McCain at a rate of 95 percent did not swing the election as the GOP lost nearly 10 percent of their base as seen in Figure 3.1 while Obama won since he both outperformed among Democrats compared to Kerry and he had more Democrats in the state than Kerry did. 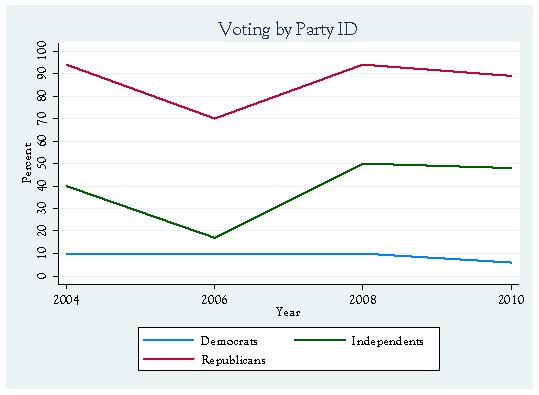 Independents are more evenly divided. In 2006, a poor campaign by Ken Blackwell and a strong performance by Ted Strickland led to a landslide victory for Democrats. Republicans also defected accounting for a large part of the Strickland landslide (we have included “leaners” as partisans).

While most citizens do not change which party they affiliated with, changes in mass partisanship can be quite meaningful. These aggregated movements are largely traceable to known factors, generally, changes in public perceptions about the competence of elected officials to handle pressing issues. Just as in sports, when a team does well, a coach gets the credit and when the team does poorly, the coach takes the blame. For political parties, holding an executive office such as the presidency or governorship is a double-edged sword. The performance of the person in charge is assessed by the public and the party as a whole gets credit or blame.

We see clear evidence for these patterns in Ohio. In 2004, Republicans were generally perceived as strong on foreign policy issues and the poor economy in Ohio generally did not hurt the GOP. President Bush was still reasonably popular (his approval rating in the state was over 50 percent most of the year).

The performance question is multifaceted and not simply a matter of the economy. By 2006, scandals and a changing issue environment were largely blamed on the Bush and Taft administrations, and consequently, attitudes towards the GOP changed. The economy deteriorated, eventually falling into a recession. In addition, the Iraq War became increasingly unpopular as casualties increased, and the conduct of the war raised basic questions about the competence of the Bush administration especially after the poor performance in handling the aftermath of Hurricane Katrina. Meanwhile, scandals had engulfed Republican office holders in Ohio and nationwide, raising the issue of corruption along with incompetence.

By 2008, however, economic conditions trumped just about everything else. Our surveys in 2008 showed nearly all voters listing it as the most important issue in the election.  The financial crisis contributed to President Bush’s popularity to plummet even further (his approval rating was just 25 percent by the 2008 election). Consequently, Republicans lost identifiers, Democrats gained supporters and Barak Obama won Ohio along with the presidency.

Party reputations, therefore, are quite meaningful in understanding both election outcomes and mass partisanship. This is important because these factors are closely linked. While most citizens do not change their party affiliation in the short term, at the aggregate level, some citizens do in fact change and so across millions of voting citizens, this can be consequential. Moreover, when parties and their office holders are seen as unable to address pressing issues, their own supporters defect and most importantly, independents break toward the opposing party.

The issue environment did not help the Democrats cause either. When asked the best way for government to help the Ohio economy, 61 percent of voters stated it would be best done by cutting taxes compared to maintaining public spending (including 60 percent of independents). When asked the best way to balance the Ohio budget, the answer was fairly lopsided; 85 percent of respondents felt it should be done by cutting state spending instead of increasing taxes.

So, in 2012, both parties will need to rely on their supporters and national and state economic conditions will be crucial for understanding how the state votes. Already, national polls are showing important shifts among voters to the Democrats, but this is being offset by reports continuing to show a struggling economy. A bad economy does not necessarily mean that Obama is doomed, but it does mean that he is probably in for a close election as he will most likely lack the strong partisan advantage in 2012 that he enjoyed in the Buckeye State in 2008. 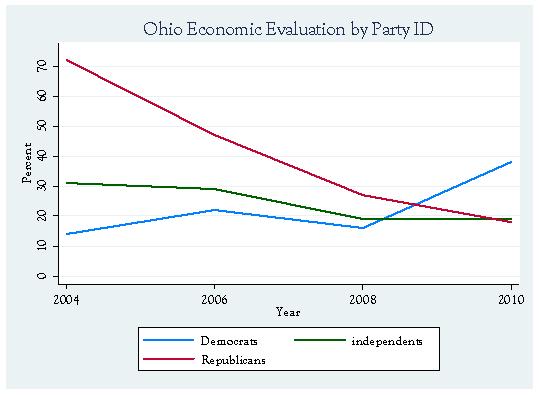