25th Amendment Symposium: When the president is unable to discharge his duties 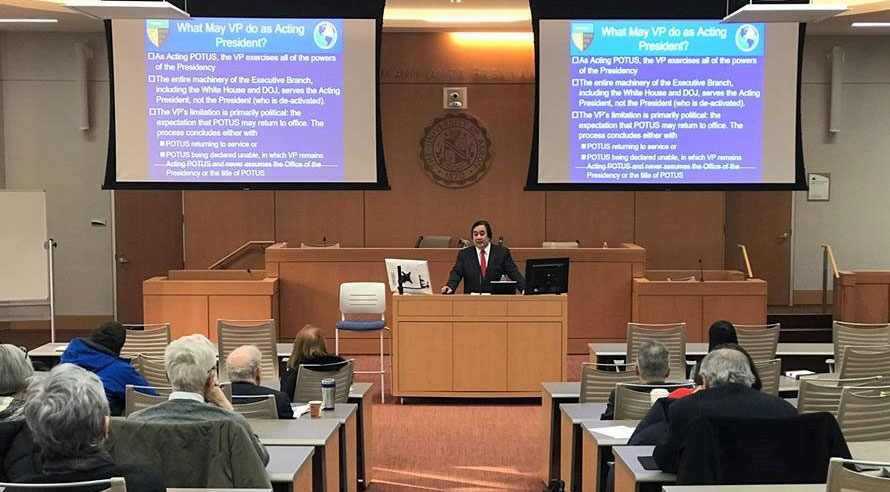 Harold Hongju Koh, former dean of Yale Law School, and the Sterling Professor of International Law at Yale, speaks during a national half-day symposium on the 25th Amendment held at The University of Akron School of Law.

On January 25, The University of Akron hosted a national half-day symposium on the 25th Amendment to the United States Constitution, marking the amendment’s recent 50th anniversary. The interdisciplinary conference was cosponsored by the Center for Constitutional Law at the School of Law and the Ray C. Bliss Institute of Applied Politics. The Con Law Center was established by Congress upon the bicentennial of the Constitution in 1986 to promote legal research and public education on the Constitution.

The afternoon panel sessions featured two of the highest-profile speakers on the 25th Amendment: Dean John D. Feerick (Fordham, Law), a key drafter of the amendment, and Dr. Bandy X. Lee, Yale professor and forensic psychiatrist, and the leading proponent of the amendment’s application to President Trump.

The man behind the amendment

As Tracy A. Thomas, Akron Law Professor and Director of the Center of Constitutional Law, explained in her introduction of Feerick, the 25th Amendment had its origin in October 1963, when the then-27-year-old law firm associate published an article in the Fordham Law Review titled, The Problem of Presidential Inability—Will Congress Ever Solve It?

Feerick argued that despite the historical evidence—President Garfield’s 1881 assassination, President Wilson’s 1919 stroke, and President Eisenhower’s 1955 heart attack—Congress had failed the American people by not addressing the ambiguities and gaps in the Constitution’s provisions for presidential succession in a crisis.

Not content with just publishing the article, Feerick distributed it widely, including with a letter to the editor of the New York Times. The editor published Feerick’s letter on November 17, 1963. Five days later, President Kennedy was assassinated.

Feerick went on to testify before Congress, help persuade key federal and state lawmakers to act, and personally assisted in drafting the amendment.

In his presentation at the Akron conference, Feerick noted while Congress was unable to reach any agreement throughout the 1950s and early ‘60s, the years of research, hearings, and failed proposals did help to make consensus achievable when Congress took up the issue with new urgency following Kennedy’s assassination.

With President Lyndon Johnson’s support and the leadership of Indiana Senator Birch Bayh, the Senate passed its final version on February 19, 1965. Differences with the House version were ironed out, and the final amendment was passed and submitted to the states on July 6, 1965. On February 10, 1967, the 25th Amendment became part of the Constitution.

Fifty years later, the amendment is making headlines again. Dr. Bandy Lee came to national prominence with the April 2017 medical conference she organized at the Yale to discuss the mental health of President Trump. That conference led to the October 17 publication of The Dangerous Case of Donald Trump: 27 Psychiatrists and Mental Health Experts Assess a President, edited by Lee, which immediately became a best-seller.

In her remarks to the symposium Lee defended the campaign to apply Section 4 of the amendment to President Trump. That is the section that provides for the forced removal of a president who is unable to discharge the power and duties of the office.

Lee acknowledged the American Psychiatric Association’s policy (the “Goldwater Rule”) that it is unethical for a psychiatrist to offer a professional opinion on an individual’s mental health without conducting an examination and being granted proper authorization. But she said the ethical duty to protect and warn potential victims, including the public, overrides other ethical concerns.

“In forensic psychiatry, we learn that it is of utmost importance to clarify the limits of our expertise and stay within its limits,” she said. “I should not comment outside my area of my expertise. But within my expertise, I can speak authoritatively.

“The 25th Amendment is not an area of medical expertise; it is a political process, in the way that disability, incompetence and unfitness are legal determinations, not medical ones,” she said. “Nevertheless, it is important to note that no court of law would consider declaring disability, incompetence and unfitness without expert input. Political processes would do well to uphold a similar standard.”

The four other distinguished panelists at the Akron symposium and their subjects were: