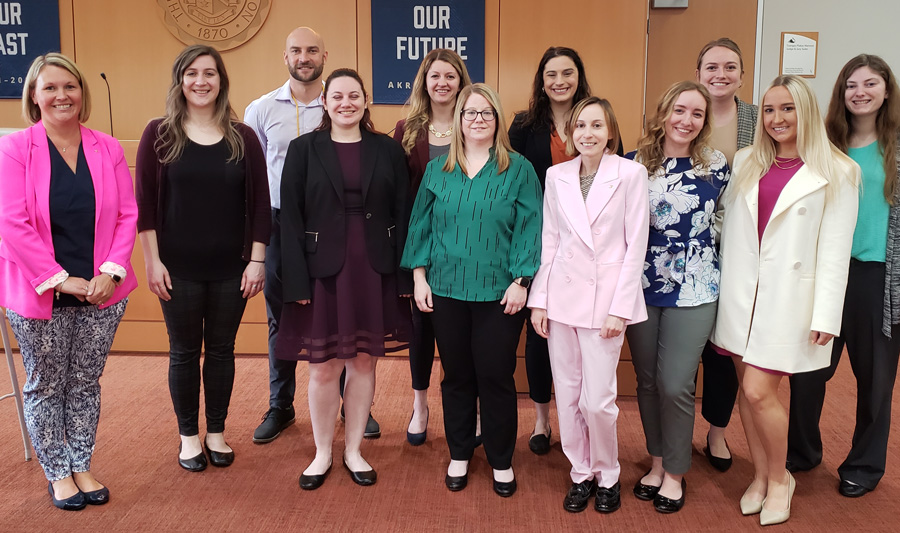 Graduates from the Class of 2022 who completed at least 150 hours of pro bono and community service were recognized in a ceremony following the end of spring classes. Dean Emily Janoski-Haehlen is at the far left.

The 2022 graduating class of The University of Akron (UA) School of Law more than upheld the school’s long-standing tradition of abundant community and pro bono service. In total, the 108 graduates donated more than 10,000 hours during their time in law school—an impressive number, especially considering the complications resulting from the pandemic.

Those who achieved 150 hours or more received an Ohio Access to Justice Foundation certificate and a cover letter signed by Ohio Supreme Court Chief Justice Maureen O'Connor and the Foundation’s board president. Recipients who go on to pass the Ohio Bar Examination will also be recognized at the swearing-in ceremony.

“Over the years we’ve had a few students complete 1,000 pro bono and community service hours during law school,” said Professor Joann Sahl, assistant director of the Akron Law legal clinic program. “But having two students do it in the same year is remarkable.”

Kellie Lockemer started doing volunteer work with nonprofits like ACCESS, a homeless shelter, and the Court Appointed Special Advocate (CASA) program while she was an undergraduate at UA, pursuing a double major in social work and philosophy. She chose to do her required School of Social Work externship in the law school’s Reentry Clinic and the Civil Practice Clinic.

“The externship was 15 hours a week, so it was a lot of time,” Lockemer said. “But I got to know Professor Sahl and a lot of other professors who volunteered at the outreach clinics. I already knew nonprofit work was what I wanted to do when I eventually got my law degree, and I was already feeling at home in the law school.”

“I knew Kellie before she came to law school, and she was terrific even then,” Sahl said. “She really showed her commitment to helping others, particularly underserved folks.

“In her 1L year, we hired her for a paid internship with the Reentry Clinic to help with the monthly outreach clinics and all the grant requirements,” Sahl said. “But she did so much more than that. She has been a remarkable student in the Clinic, and I’m going to miss her. We selected her to receive the Outstanding Clinical Student of the Year award from the Clinical Legal Education Association.”

That first year Lockemer continued to volunteer at ACCESS, but when COVID hit, that pro bono opportunity and others dried up.

“I didn't have anything for a while, so I reached out to different organizations, asking if I could intern or volunteer, just to get some experience,” she said. “One of those organizations, ASIA [which serves the Asia American and Pacific Islander community] said yes. I worked pro bono there the rest of the summer full time and then around 20 hours a week during the fall.”

After ASIA hired Lockemer for a part-time paid position in the spring and summer, she continued to work extra hours there on a pro bono basis. To get some different experiences during the summer, she volunteered in the legal department at Summit County Children Services and continued to volunteer as a CASA.

“When Afghanistan fell last August, it impacted our work at ASIA, but not greatly,” Lockemer said. “I had some Afghan coworkers, and I felt the need to help more. I found Human Rights First, a national nonprofit. I was able to intern from home in the spring semester as part of their team helping evacuate Afghans to the U.S. and then finding them pro bono attorneys across the country to help with their legal cases.”

Lockemer is currently studying for the July bar exam and looking at job opportunities. ASIA has offered her a position as a staff attorney.

When Laura Grimes was in the 4th grade, she learned that if you made it to the Supreme Court, you couldn't get fired.

“I thought, that is a job for me! So, I researched what it is to be a judge and learned that you have to be lawyer first. And that was my plan for the longest time.”

Grimes enrolled at Capital University and majored in political science. She had to step back from college when she became pregnant and later had a second child. When the two children reached their early teens, she finished her degree online in 2019, switching her major to criminal justice administration.

“I could have been a prison warden,” she said. “My kids were like, yes, that is exactly what you should be! We'll write you letters of recommendation.”

Like Lockemer, Grimes started volunteering in the Reentry Clinic before she entered law school. She met Professor Sahl while touring the campus and learned about the clinic.

“I was very interested,” she said. “I've always wanted to help people because I wouldn't be where I was if somebody hadn't help me. And to be honest, I also thought it would look good [on my resume] and maybe they’ll let me in. As it turned out, I really enjoyed it, and I continue doing the clinics as often as I can.”

She would later find another opportunity to work with Sahl for course credit in the Expedited Pardon Project. She continues to help two of her clients get their pardon “just because it was important to me [that they not have to start over with another law student].”

Grimes’ first pro bono experience outside of the Akron Law clinics was with Community Legal Aid Services in spring and summer 2020.

“I worked in the housing division, learning about evictions,” she said. “That was so gut wrenching, always worrying that the families we were helping were going to get evicted. But it was great experience. I learned it's hard being an attorney and having to deliver bad news.”

Looking for experience more in line with her interest in criminal justice, Grimes applied to work at the Coleridge Law Office, a small firm in Canton that specializes in criminal defense and family law.

“The opening was for a paid internship, but I told attorney [Chris] Coleridge I’d work for free because I wanted to get enough volunteer hours to get the pro bono certificate from the Supreme Court. I was hired on the spot.

“It’s important for me to show my kids that if you can, you give back,” she said. “My spouse has a good job, so we could afford to do this. It also meant that attorney Coleridge could hire someone else, which he did. It's a great work environment there. Once I pass the bar, I’m going to be the firm’s first associate attorney.”

An emphasis on pro bono

Although virtually every U.S. law school encourages students to engage in pro bono and community service, Akron Law is one of only about 40 that require a minimum number of pro bono service hours as a condition for graduation—30 hours in Akron’s case.

“Akron Law implemented the requirement to ensure that every law student experiences the personal and professional benefits of pro bono and community service; to promote their future pro bono involvement as attorneys; and to provide awareness of legal and access to justice needs in our community,” said Assistant Dean for Career Services and Strategic Initiatives Alisa Benedict O’Brien. “I really can’t recall a graduate who didn’t say they valued the experience.”

Below is the full list of the class of 2022 pro bono award recipients, including total hours:

To learn more about pro bono options at The University of Akron School of Law, visit here.