From law enforcement to law school, and other challenges

Through high school, four years of college at The University of Akron (UA), and his first 10 years in law enforcement with the Summit County Sheriff’s Office and now the UA Police Department, Darrell Claytor never gave law school more than a passing thought.

He loved his job as a lieutenant in the UAPD, where he’s worked since 2012. And he had taken advantage of the educational benefits to complete an M.S. Ed. in exercise physiology in 2016. But with the University dealing with budget pressure, the UAPD was not hiring and there was only one officer below Claytor in seniority. He began to think about diversifying his career options and looked into the idea of going to law school.

“It’s always good to have a Plan B,” he said. “I could see that a law degree would make me a stronger candidate for promotion, and it would also open up a lot of different career avenues. I learned a lot in criminal law classes that they don’t teach you in law enforcement, but I could also be a corporate litigator or legal counsel for a business or a university.”

Claytor took the LSAT in 2017. He started classes at the School of Law in fall 2017 as a part-time student and continued straight through the summers, including the four-week Asia Summer Abroad program in 2019. Then he picked up the pace last fall, taking a full-time course load.

Meanwhile, he continued working full-time as a campus police officer, including being in charge of the midnight shift. And it’s not like there was any slacking off. He was promoted to lieutenant in December.

“Law school has been a great experience, and I’m excited to finish up my degree this December and take the bar.”

It’s been a challenge, but not the biggest one Claytor has faced.

“I am blessed to be here talking to you to this day,” he said.

He had just graduated from Akron’s Archbishop Hoban High School and was looking forward to freshman year of college when he got really sick.

“I was diagnosed with ulcerative colitis. You bleed internally a lot, and they could not get the infection under control. I spent the whole summer at Akron City Hospital getting blood transfusions to stay alive. It was scary. My parents were freaked out.

“The hospital sent me to the Cleveland Clinic to have what's called a total colectomy. They took out my entire large intestine. I had to have an ileostomy performed – an external pouch for discharge of bodily waste. Six months later, I had to get my small intestine reshaped. And two months after that I had surgery to close the ileostomy.

“If you saw me after those three surgeries, you would have thought I was on death’s door. But I got a second chance, and I think that inspired me for the rest of my life. They told me I would need to have pretty much a sedentary lifestyle, nothing physical. But I was like, no! I wanted to be a police officer. I wanted to do something active in life.

“So, I started training, and they said that might not be a smart move. But I kept training and lifting weights and running. I started college that next fall and finished my bachelor’s degree in sociology and law enforcement in four years. 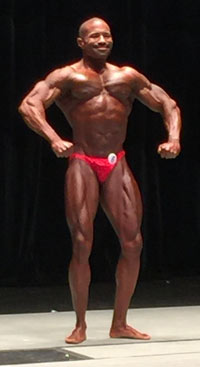 “I got into competitive bodybuilding, and I still compete. In 2016, I got to represent police officers from the state of Ohio at the National Police and Fire Games in San Diego, where I won a gold and a silver medal,” he said.

“It's all on what you want to accomplish in life. It might not be easy, but like that adage says: ‘If it was easy, everybody would do it.’ I believe it’s about working hard and being mentally tough. It’s just about discipline.”

Top of the Civil Procedure class

“I remember Darrell well. He was a very strong student in both the fall and spring Civil Procedure classes,” C. Blake McDowell, Jr. Professor of Law Bernadette Bollas Genetin said.

“In the fall term, which is more theoretical, Darrell consistently came to class ready to discuss the complex issues regarding federal court jurisdiction covered in the course. These are difficult issues. Students must understand both the federal court system and the interplay between the authority of Congress and the federal courts under the Constitution. The second semester is more pragmatic. Students draft litigation documents and learn the process of moving a case from the filing of the lawsuit through trial and appeal.  Darrell was at the top of that class too,” she said.

“I think being more mature and having had life experiences made Darrell confident in expressing himself,” Genetin said. “But he wasn’t just expounding. Darrell put in the hard, sometimes tedious, pre-class preparation, and he made strong, well-supported arguments.  Those are the qualities of a good attorney.”

Claytor’s insights gained in 14 years of wide-ranging law enforcement experience have been welcomed in various classes, while his fellow UA police officers have benefited from what he has learned in law school.

“I’m able to share the knowledge that I’ve gained, because they don’t teach things like constitutional law or criminal procedure in the police academy,” he said.

Claytor really enjoys the community relations and educational aspect of his job, for example, doing freshman orientation presentations on how to stay safe. Like the prospective police chief, litigator, legal counsel, or university administrative he is, Claytor thinks about policing from an institutional standpoint.

“Our job is to keep the bad people away from the students and faculty and staff. But it’s also making sure that our students succeed -- that they get through college unscathed, that they don't feel discriminated against, that if they are a suspect in something, how can we help them not get it on their record so they can learn from their mistakes. Because, if the students don't succeed, the University doesn't succeed, and if the University doesn’t succeed, none of us are here.”