Game development is engine of success for computer science student

As part of The University of Akron’s sesquicentennial celebration — honoring 150 years of our people, place and promises — we are hosting a “Celebration of Academic Excellence” to highlight the history and future of our colleges and academic disciplines.

Today we are looking at the history and achievements of the College of Engineering and Polymer Science. 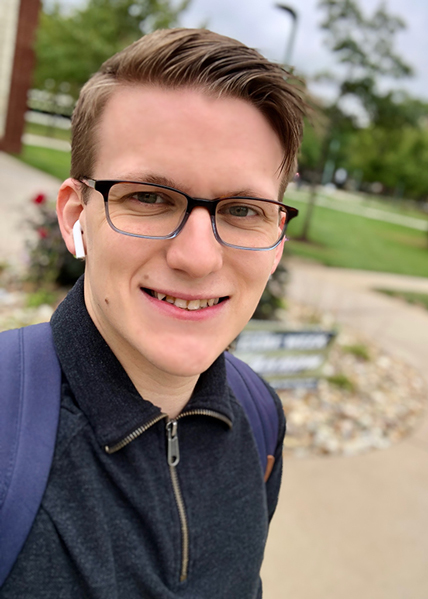 UA computer science student Patrick Howard, of Cincinnati, Ohio, is reaching the next level of his dream job — one he’s had in mind since fifth grade — by putting his knowledge, expertise and experience to great use before he graduates in May 2022 from the College of Engineering and Polymer Science.

Since 2019 Howard has been developing video games with Cleveland start-up Strife AI LLC, a company he co-founded that builds games that utilize next-level machine learning algorithms to make even more immersive experiences and is building the tools to help other companies build their games with machine learning. Specifically, Howard develops and iterates on gameplay elements and features and develops Strife AI’s custom game engine.

Picture an avatar in a video game that must interact with other characters while manipulating the elements of the virtual world around it. Howard is behind the programming components that make that a reality.

“Think of the ‘engine’ as the part of a game that makes everything ‘tick’ and handles all of the pieces that makes a game environment come to life,” says Howard. “I am also building gameplay elements for our upcoming multiplayer online battle arena (MOBA) game, which I’m really excited for.”

A video game developer specializes in software development and processes specifically for video games. Typically, at a large game studio, programming tasks are split into specialized fields, such as graphics, sounds and design.

“‘GameDev,’ which is how I refer to the field, is one of those areas that many people say they want to get into, but never do because of how competitive it can be,” says Howard. “Game programming as a whole is not easy, you’re building what are essentially whole simulations. I got back into more advanced GameDev my senior year of high school, learning how to do 3D art and working with the Unity Game Engine.” 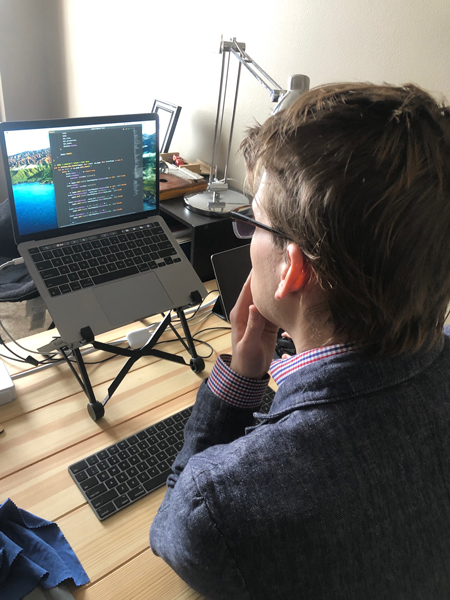 Patrick Howard looks through a piece of programming code that handles event logic, which includes such movements as pushing a button on a gamepad and pressing a key on a keyboard.

Howard’s passion for video game development started around 11 years ago when he learned computer programming and would make simple desktop computer games using the limited knowledge and experience he had. Although he received some formal training in high school classes, he spent his free time practicing programming and became self-taught.

“I have a lot of other interests and I even explored other career paths while in college, such as computer engineering,” Howard says. “But I really enjoyed the creative aspect of doing game development. It was something that I always came back to.”

One of the reasons Howard chose to study computer science at UA is the area’s strong connection to start-up businesses.

“Northeastern Ohio, specifically Akron, has a history of innovation,” says Howard. “The state of Ohio and the city of Akron together have provided resources for both tech startups and manufacturing-oriented startups. There are people at UA that are connected to the startup scene — they either work at UA or they are associated with the University. And a function of being a part of a start-up is making loads of connections with others. It’s what makes urban-research campuses like UA stand out.”

Unlike larger video game developing companies, at Strife AI, Howard is one of three developers on a five-person team, giving him more practical experiences in the many facets of game development. He has to understand almost all of the programming code he’s working in.

It's been UA’s computer science program that has impacted Howard's game-developing skills.

“Having a strong understanding of systems-level programming languages, such as C++, are essential,” says Howard. “Linear algebra and vector math, or calculus III, are also essential. Most development jobs will also want a portfolio, so I always encourage students to have passion projects and build things they’re interested in.”

With working full-time at Strife AI and keeping up with the demanding obligations to complete his degree, Howard says “it’s certainly” not easy to balance being a student and working as a game developer, a competitive field in which to be a programmer.

“I developed a lot of organization skills when I worked in the IT department and as a resident assistant at UA,” says Howard. “Things such as keeping a planner, maintaining a calendar, to-do lists, and so on. Of course, there’s a lot more to being a college student than just classes and work. I also have to balance my social life and physical fitness too. I’m often amazed at how much one can do in a single day.”