You probably know that Thor tosses down a mean hammer and Superman leaps tall buildings in a single bound. But do you know which superpower Microbio-Man possesses? Never heard of Microbio-Man?

Isuru Priyaranga Silva, a University of Akron Ph.D. student in microbiology and astrobiology, is the superpower behind the superhero known as Microbio-Man. 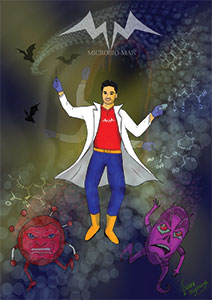 Silva is one of five winners of a nationwide scholarship contest sponsored by LewerMark, a company that provides health insurance programs exclusively for international students. The contest theme was “If you were a superhero.” Not only did Silva come up with the idea, but he submitted completely original artwork depicting Microbio-Man.

“I believe that every microbiologist is a superhero,” said Silva. “We don’t have to wear special capes as we already wear our lab coats as our superhero wear.”

The graphic character is a genius in all specialties of microbiology such as bacteriology, virology, pathology, infection control, microbial drug discovery and medical microbiology—along with Silva’s own specialty of cave microbiology.

“Microbio-Man’s widespread broad knowledge, experience in any microbiology field and desire to cure all diseases” are what make him special.  In addition, he focuses on disease identification, control and drug discovery.

According to Silva, there are many hidden details in the artwork, including why caves are so important. He pointed out that caves are a source of potential antibacterial, antiviral and antiparasitic drugs. Many of the unique native bacteria and fungi species that live in these caves could possibly be used to create groundbreaking drugs.

As for superhero tools, said Silva, microbiologists rely on inoculation loops, needles, swabs and agar plates to isolate and identify microorganisms and test different drugs in preclinical and clinical tests and verifications.

“These are our weapons and tools to fight against our enemies,” Silva added.

He created Microbio-Man from “ideation and sketching to digital drawing without using stock images.” Instead, Silva’s arsenal included an XP-PEN, Adobe Photoshop CC 2015 and Illustrator CC 2015.