Mitchell S. McKinney named dean of the Buchtel College of Arts and Sciences

The University of Akron (UA) has named Mitchell S. McKinney, Ph.D. as dean of the Buchtel College of Arts and Sciences (BCAS). He will begin the position on July 1, 2021, pending approval by the Board of Trustees at its February meeting. McKinney will replace Joe Urgo, Ph.D., who serves as acting dean of the college and interim senior vice provost.

“The Buchtel College of Arts and Sciences represents the roots and origins of The University of Akron and is our oldest College. It is the heart of our academic body, serving students from all majors, and forming the solid base from which our students pursue their life’s work,” said Provost John Wiencek. “We are so fortunate to have Mitchell McKinney stepping into this important role. He is highly regarded by his colleagues for his leadership and scholarship, especially in areas focused on equity and social justice, and I am confident that his expertise and enthusiasm will catalyze a substantial advancement of academic and scholarly excellence within Buchtel College and in service to our students.”

A renown political communication scholar, McKinney comes to UA from the University of Missouri (MU), where he serves as a professor of communication and director and founder of the Political Communication Institute. During his tenure at MU, he was appointed to several academic leadership positions, including director of graduate studies, and both associate department chair and chair of the Department of Communication, one of MU’s largest academic units. He also served as Faculty Fellow for academic affairs in the Office of the Provost. 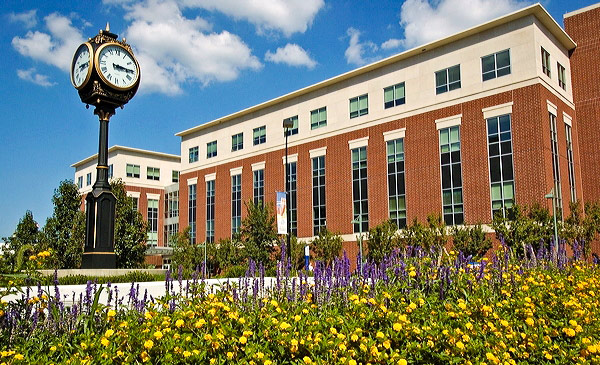 The Buchtel College of Arts and Sciences Building

“It’s a tremendous honor to be named dean of the Buchtel College of Arts and Sciences at The University of Akron,” McKinney said. “Colleges of Arts and Sciences serve as the intellectual core of the university; and during such challenging times for higher education, I’m eager to begin my partnership with the outstanding BCAS faculty and staff in education, fine arts, humanities, social sciences, and the natural sciences as we serve our students and the Akron and Northeast Ohio communities through our instruction, research and creative endeavors, and engagement activities. I’m also anxious to begin work with my UA dean colleagues and other senior campus leadership as we continue building one of our nation’s truly exceptional urban research universities.”

In addition to excellence in teaching, McKinney has been recognized by academic colleagues and the national media as one of the nation’s top scholars of presidential debates. He served as an advisor to the U.S. Commission on Presidential Debates where his work was instrumental in developing the presidential town hall debate and other innovations in the structure and practice of televised presidential debates in the U.S. He also has served as an advisor to the national election commissions in other countries, including South Korea, Germany, Great Britain and New Zealand as those nations developed their own televised presidential and party leader debates.

Using his training as a political communication scholar, McKinney gained practical political experience by having served as a staff member in the U.S. Senate and at the White House. He also served as associate director of the National Communication Association in Washington, D.C., and as president of the Central States Communication Association. He remains a frequent commentator for national and international news media and has provided expert political commentary for such media as the New York Times, the Washington Post, USA Today, CNN, C-SPAN, NPR and BBC News.

At the state and local level, he has served as a moderator for gubernatorial and congressional televised debates; and consulted with numerous civic organizations in planning state and local candidate debates and forums. He has been awarded approximately $1 million in support of his research and public engagement activities, with funding from the Pew Charitable Trusts, the Ford Foundation and the Donald W. Reynolds Foundation.

After more than 20 years in Missouri, McKinney and his partner Bryan Pepper look forward to finding new neighbors in Akron and settling in with their family of three adorable and often rambunctious kitties, Bentley, Alley and Charlie.