As part of The University of Akron’s sesquicentennial celebration — honoring 150 years of our people, place and promises — we are hosting a “Celebration of Academic Excellence” to highlight the history and future of our many academic disciplines. Alumna Rachael Steer will use her degree in philosophy, political science and economics in her career in international security.

As she watched protesters smash the windows of the United States Embassy, scale its graffitied walls, tear down its flag and fill the air with flames and fervent chants, Rachael Steer ceased to be an “ambivalent spectator” on the world’s stage.

It was the spring of 2018, and Steer, an intern at the Department of State in the Foreign Service Institute (FSI), in Arlington, Va., had just watched footage of an attack on a U.S. Embassy shortly after the Arab Spring. A junior in the Philosophy, Political Science and Economics (PPE) program at The University of Akron (UA), Steer’s role at the FSI was to help develop courses to prepare career diplomats deploying to high-threat posts. 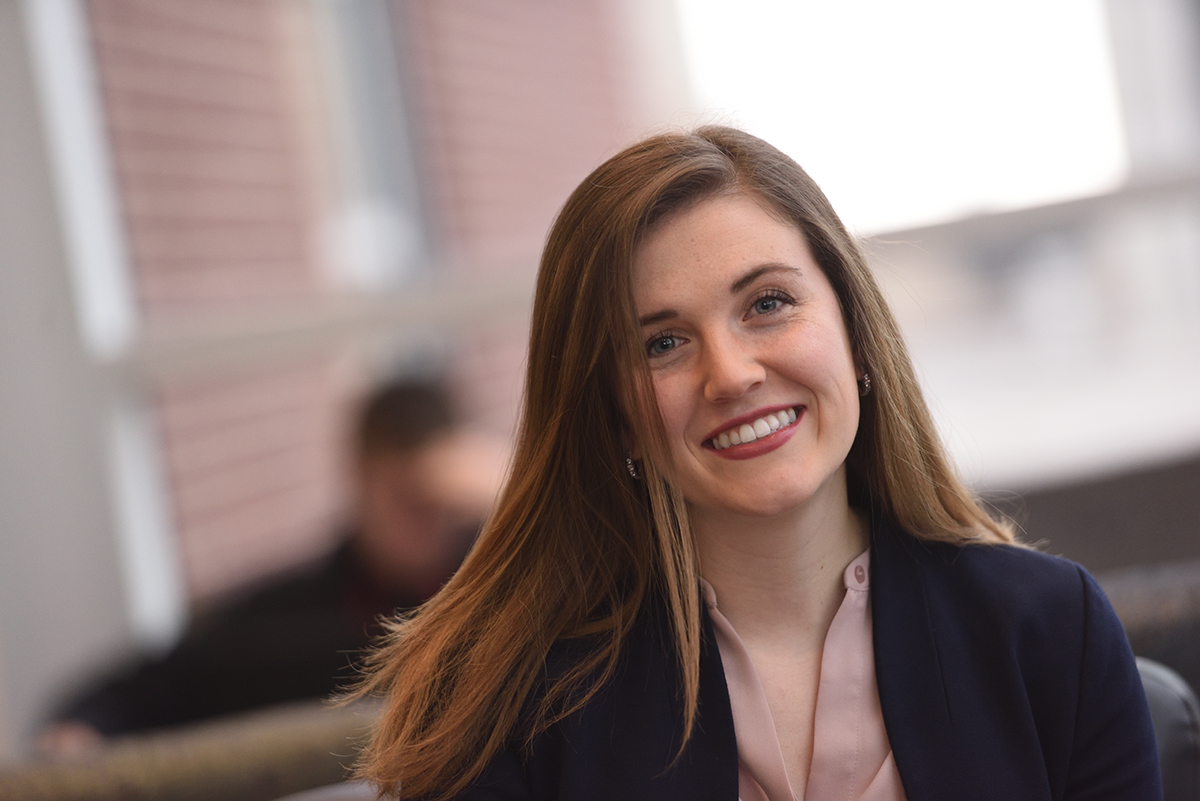 Rachael Steer credits UA’s PPE program for teaching her the key to international relations — the ability to examine issues through multiple lenses and perspectives.

“As I sat among individuals who either worked in an embassy during an attack or lost colleagues to similar violence, my perspective shifted from that of an ambivalent spectator to feeling profound passion for those who protected the U.S. amidst the violence,” Steer said. “I recognized that the next generation of students working to improve international partnerships would be instrumental in preventing further violent conflict. This marked a defining point in my desire to study international relations.”

That desire led her to another internship with the Department of State, in the fall of her senior year, at the U.S. Embassy to the Holy See in Rome, Italy, where she worked in the Public Affairs Division to act as a researcher and public liaison.

Seeing the world through multiple lenses

Now, as Steer prepares for a career as a researcher or policy analyst in international security, she credits UA’s PPE program for teaching her the key to international relations — the ability to examine issues through multiple lenses and perspectives.

“I can remember several times when I studied a specific problem in philosophy, only to arrive at an answer that was different than when we approached it in a political science context — and different still from the economic analysis lens,” she said. “The ability to view issues from multiple perspectives has significantly enhanced my ability to analyze policy, engage audiences of various backgrounds, and constantly ask questions.”

Owing to its interdisciplinary focus, the PPE program prepares students to be effective in a variety of career paths, according to Dr. Dimitria Gatzia, one of Steer’s philosophy professors.

“The PPE was created from the conviction that an interdisciplinary study of the great modern works within philosophy, political science and economics would have a transformative effect on the intellectual lives of students, and thereby society at large,” she said. “It is a highly desirable degree because these important approaches to understanding the world enable students to seek countless career paths, allowing them to actively participate in societal change.”

As a student in the Drs. Gary B. and Pamela S. Williams Honors College (WHC), Steer was able to put her PPE training to use in her capstone Honors Research Project, a thesis paper examining Kazakhstani public opinion toward China, which she worked on with her thesis advisor, Dr. Karl Kaltenthaler, professor of political science, and Dr. Sucharita Ghosh, professor of economics, both of whom have won Fulbright Awards. 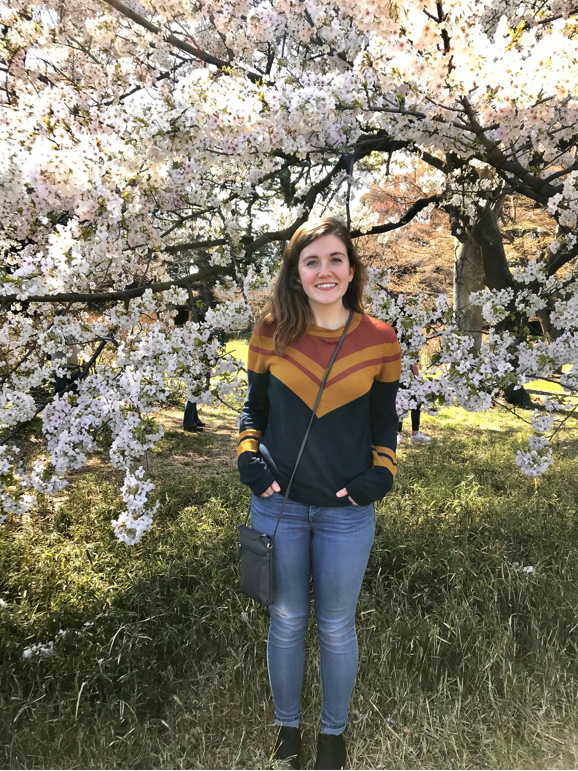 Rachael Steer is seen here at the Imperial Palace Grounds in Tokyo, Japan, which she visited through the Williams Honors College Global Lawyer program.

While all these experiences exposed Steer to many different viewpoints, what most resonated with her was that, despite their differences, “people are people,” sharing a common humanity and dignity.

“It’s imperative to put people at the heart of these complex political, economic and philosophical calculations,” Steer said. “Consistently looking to humanize others helps both parties, and helps you stay true to your own values.”

Indeed, in requiring her to adopt diverse perspectives, the PPE program has also enhanced Steer’s natural empathy and compassion for the flesh-and-blood people at the center of those often impersonal calculations.

An avid volunteer when she was a student at St. Vincent-St. Mary High School in Akron, Steer continued to serve the community throughout her time at UA, ensuring that real people, rather than abstract strategies and theories, remained at the center of her work.

She was, for example, the founder and inaugural president of UA’s Amnesty International chapter. She provided English-language and civics education to local African, Middle Eastern and Asian refugees through Asian Services in Action Inc. She also tutored students in the Summit County Juvenile Court, and helped adult learners prepare for the GED exam through Project Learn of Summit County, from which she received an Outstanding Volunteer Award.

In addition to its Distinguished Scholar Award, the WHC, in recognition of Steer’s extraordinary leadership and service, presented her the Hunter’s Award of Distinction for Outstanding Commitment to Public Service.

With the funds from the Hunter Award, Steer traveled to the Greek island of Lesvos, where she volunteered with the nongovernmental organizations Becky’s Bathhouse and Doctors Without Borders to provide sanitary and medical aid, including scabies treatment, to men, women and children in the overcrowded Mória Refugee Camp.

“It was one of the most powerful experiences for me,” she said. “Immigrants and refugees are some of the strongest, most resilient, awe-inspiring groups of people I’ve ever had the pleasure to work with.”

At the London School of Economics, Steer continued to aid and protect the vulnerable, working with a counter human trafficking charity in London. Currently, she is involved with #NatSecGirlSquad and the Nuclear Fusion Project, both of which are focused on national security and defense.

Far from an “ambivalent spectator,” Steer has proven herself a passionate player on the domestic and international stage. Now, she is poised to take a lead role in improving international relations, and in preventing the conflicts that topple embassies and threaten the lives of diplomats, migrants and civilians alike.

“In the long term, I aim to apply my curiosity and the ideas that PPE generated to enhance intercultural communication, facilitate discussion and help craft solutions to counter emerging threats to international and human security,” she said. “I am confident that I will draw from the lessons I learned at UA; and, undoubtedly, the faculty and staff will continue to play an invaluable role in the lives of countless other students.”