UA and Airborne Project on pathway to FAA certification

Faster, market competitive and safer airplane repairs. That’s the goal of a project by The University of Akron and Airborne Maintenance and Engineering Services in obtaining Federal Aviation Administration (FAA) approval for “cold spray” repair of corroded and worn parts on commercial aircraft.

Promising demonstrations and test results of this application were showcased at Airborne Maintenance and Engineering Services at the Wilmington Air Park on March 27. Members of the Ohio General Assembly – including Speaker of the Ohio House of Representatives Cliff Rosenberger and Ohio Senate President Pro Tempore Bob Peterson – viewed progress of Supersonic Particle Deposition (SPD), a groundbreaking aircraft repair method for applying metal particles to rebuild the surfaces of corroded and worn parts.

By extending the useful life of an aircraft’s parts, this public-private partnership initiative is anticipated to lead to the first FAA certification for full-scale commercial aircraft repair operations. For a region that is actively expanding the job market by developing emerging technology to grow the aviation sector, this approval is another step forward in additional jobs and economic development opportunities.

The technique involves a high pressure spraying process in which metal particles contained in a supersonic jet of an expanded gas impact a solid surface with sufficient energy to cause bonding with the surface. This additive manufacturing process builds up and repairs the surface of the metal part without creating a heat-affected zone that would occur during welding or high temperature thermal spray.

Development and testing has been underway for two years, funded by the Ohio Legislature in the last Operating Budget, and supported by The University of Akron’s National Center for Education and Research on Corrosion and Materials Performance (NCERCAMP) in collaboration with Airborne Maintenance and Engineering Services (AMES), SAFEngineering, Inc., and U.S. Technology Corporation. The data gathered has provided the foundation with the information required for FAA approval of SPD dimensional restoration of aircraft structure.

This collective effort has produced numerous achievements with the SPD technology highlighting the effectiveness of public-private partnerships for economic growth. Once the goal of this program is attained, the application of the process is limitless across the commercial aviation sector.

UA’s Corrosion Engineering program is the first of its kind in the United States. Housed at The University of Akron, NCERCAMP provides a multidisciplinary approach to help government and industry develop solutions for corrosion and materials performance challenges. In response to requests from private industry and the Department of Defense in 2006, The University of Akron launched an effort to help address the cost of corrosion on the nation’s economy, estimated at more than $400 billion annually. In 2010, NCERCAMP was established by Congress and the U.S. Department of Defense.

“We are grateful for the support that the state of Ohio has provided for this first phase of the SPD project, which is making significant progress,” said Dr. Rex Ramsier, UA’s senior vice president and provost. “This partnership brings together the University’s expertise in corrosion and materials science with the extensive experience that our partners have in aviation and technology to create an exciting opportunity for job creation and technological advancement in Ohio.”

Airborne Maintenance and Engineering Services is a maintenance, repair, and overhaul (MRO) company that occupies nearly a half-million square feet of hangar and component repair/overhaul facilities at the Wilmington Air Park in southwest Ohio, plus an additional 340,000 square feet in Tampa, Fla. The company employs more than 800 people at its Wilmington facility. AMES is a wholly owned subsidiary of Air Transport Services Group.

SAFEngineering Corporation (SAFE, Inc.) is a research, development, test and evaluation company providing aircraft engineering and certification services for commercial airlines and MROs. With its highly specialized team of scientists and engineers, the company has developed the FAA Certification Plan; process specification; mechanical and environmental test plans; repair substantiation; and repair specification. In collaboration with The University of Akron, SAFE, Inc. is executing the robust test program required by the FAA.

U.S. Technology Aerospace Engineering Corporation (USTAE) has 25 years of professional engineering experience in all phases of aerospace painting and de-painting operations. Located in northeast Ohio, it works with AMES and NCERCAMP to install the SPD equipment at the AMES facility. 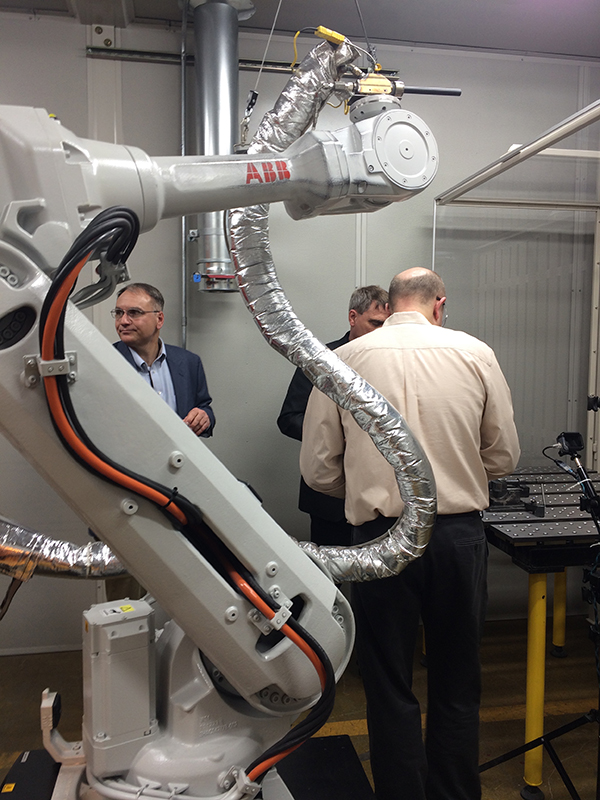 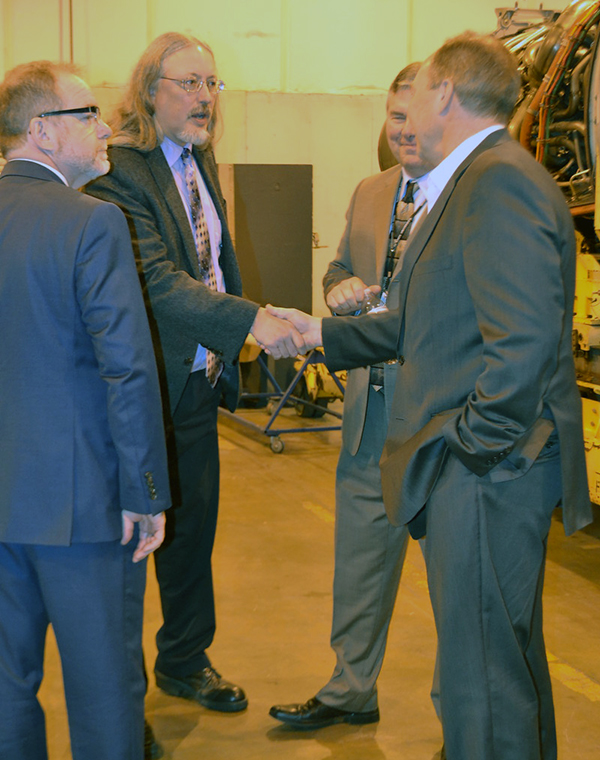 This aluminum domino is a before/after demonstration of how the Supersonic Particle Deposition (SPD), also known as Cold Spray, applies metal particles to a worn part, building up and repairing surface damage.