When does a headache need an engineer to fix it?

Expertise in fluid mechanics at The University of Akron has attracted funding for a new research center designed to help physicians better diagnose and treat an unusual cause of pain in the head, neck and shoulders.

Chiari malformation is a disorder of the neurologic system that is caused in part by an imbalance in brain and spinal fluid.  UA engineers are able to probe the “hydraulics behind the headaches” and develop new diagnostic methods to detect which patients are most likely to benefit from surgery. 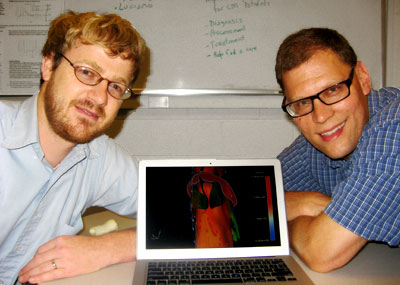 Chiari gets its name from a pathologist who discovered a malformation in the brain in which the bottom part of the brain (the cerebellum) bulges out of the base of the skull and crowds the spinal cord, blocking the normal flow of spinal fluid, and creating unusual pressure and sometimes excruciating headaches and nerve damage. CM is similar to multiple sclerosis in its frequency, but has received little attention until recently when advanced diagnostic imaging has increased the incidence of detection and understanding.

The Conquer Chiari Research Center will open this summer at UA’s new engineering research facility, with $275,000 in initial funding from the Conquer Chiari Foundation, based in Pittsburgh, and a pledge for $140,000 in annual renewal funding. The funding supports the work of mechanical engineer and associate professor Dr. Francis Loth: “Essentially, we’re developing new MRI methods using computational fluid dynamics to simulate the flow of fluids from the intracranial space into the spine. We can visualize the blockages that prevent normal flow of fluid and determine if surgery is warranted.”

Working with physicians and patients from the Cleveland Clinic and University of Cincinnati Medical Center, Loth has tested his imaging model on 10 patients during the past two years with positive results.

An earlier grant from the National Institutes of Health, totaling nearly a half million dollars, supporting Loth’s research helped inspire funding for the new UA research center.  “It’s clear to us that the University and the Greater Akron area represent a hub of biomedical activity parallel with our priorities,” says Rick Labuda, founder and executive director of Conquer Chiari. “This is a critically important project and it is spreading a great deal of excitement.”

Patients with CM often suffer from head, neck and shoulder pain, trouble swallowing, sleep apnea, loss of bladder, bowel or fine motor control, weakness in arms and legs, balance problems, numbness in hands and feet, and progressive nerve damage. The symptoms can be relieved after surgery to create a more normal flow of spinal fluid with a reported 70 percent success rate in reduction of symptoms.

“Physicians have come to understand that a dynamic movement of fluids in and around the brain plays a vital role in maintaining the brain's shape and vital blood supply. Dr. Loth's work addresses the critical question of how fluid movement may actually push the posterior portion of the brain out of the skull, as seen in Chiari Malformation,” says Cleveland Clinic neurosurgeon Dr. Mark Luciano, who has partnered with Loth on this research. “Understanding this process is our best hope for the treatment of a disease, which is being increasingly diagnosed and can have devastating neurological consequences. His work on the dynamic fluid flow through the brain may also add insight to the treatment of other neurological disorders such as hydrocephalus and traumatic brain injury.”

Dr. Bryn Martin, a scientist from the prestigious Swiss Federal Institute of Technology of Lausanne and former postdoctoral research fellow at UA, returned to Akron last week to lead the center. “Frank Loth has been an inspiration to me as an engineer and a longtime mentor,” Martin says. “As an engineer, it’s a true pleasure to work on Chiari because it doesn’t involve building bombs or automobiles. We work with people and can have an impact on lives."