Ray C. Bliss began his political career as an errand boy for an Akron, Ohio mayoral race in 1931, and he progressed to become a living legend in the Republican Party, serving as its national chairman from 1965 to 1969. Bliss is credited with breathing life back into the GOP after Barry Goldwater's presidential defeat in 1964, as well as for his role in strengthening the two-party system. 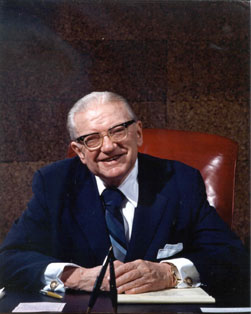 His involvement in all levels of party politics is the legacy for which Bliss is best remembered, along with his capacity to motivate grassroots organizations. Bliss recognized that the success of the American political system rested on vigorous two-party competition, and that competitive parties are built from the bottom-up. During his 50-year political career, Bliss served as party chairman at the county, state, and national levels. As such, he played a major role in electing Republican presidents, governors, legislators, mayors, and other local officials.

In 1949, Bliss was called to Columbus, Ohio to rebuild the state's Republican Party. With his assistance, the party moved from winning one in eight races in 1948 to winning five out of seven races in 1950, and it gained control of the state legislatures. In 1965, Bliss was summoned to Washington, D.C. to perform a similar service for the national GOP. Four years later, a Republican was in the White House, and the party had gained 14 governorships, 11 U.S. Senate seats, and 52 seats in the U.S. House of Representatives.

Bliss believed above all in winning elections. Accordingly, he saw diversity and inclusiveness within parties as more important than ideological purity. He was also an innovator in campaign techniques, pioneering the use of public opinion polls and television in elections. Bliss was a skilled statesman. His professionalism and integrity have served as a model for generations of party activists.