ABE Collection at the Center for the History of Psychology

The Kissing Bunny, sometimes called "Romeo Rabbit" was a popular attraction of the IQ Zoo.  Below is the prop used to simulate the bunny's "girlfriend."  For a fee, Romeo would come out of his house and "kiss" his girlfriend before returning home.  Read the manual for this exhibit.

Another popular attraction at the IQ Zoo was a 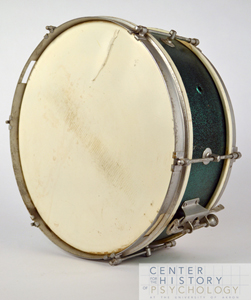 duck that drummed on cue.  Using its beak, the duck would come out of a resting area and pound on a large drum until he was signaled to stop.  Read the manual for the Drumming Duck. 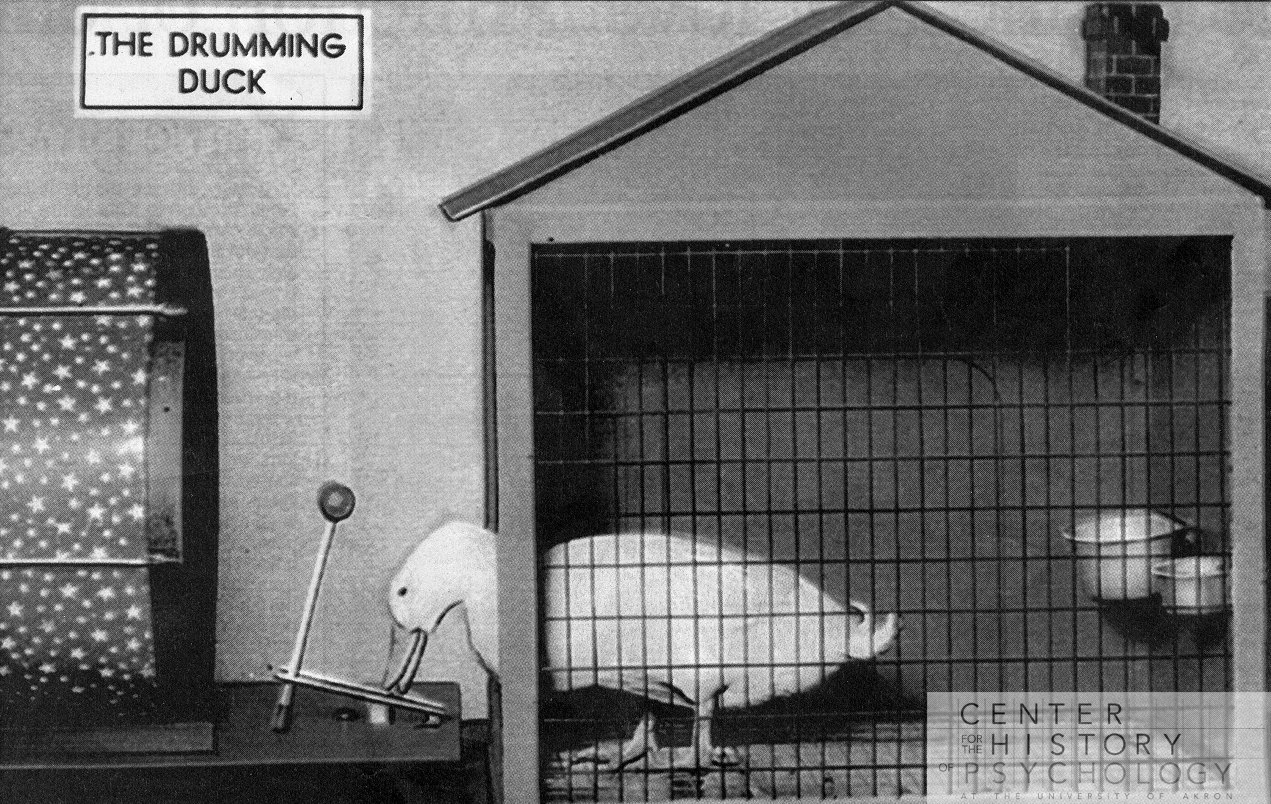 The drum housed at the CHP is shown on the right.  The signs of wear and tear, presumably from many performances, are visible on both sides. 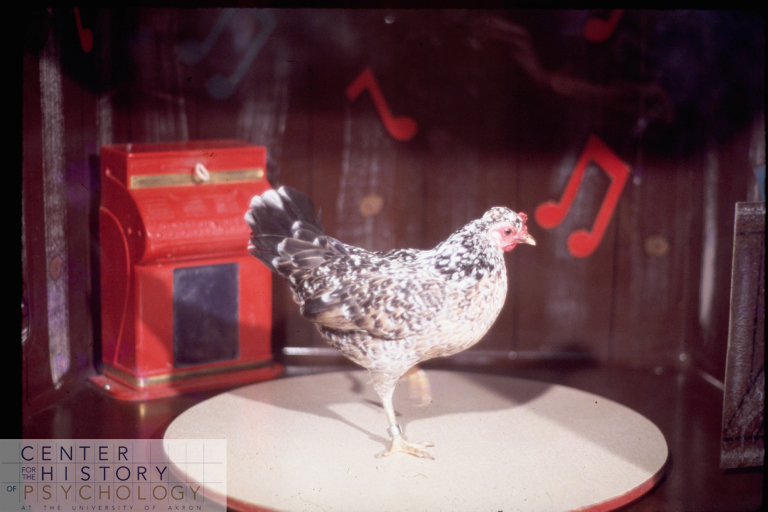 During its time on stage, a hen would pull on a loop attached to a "juke box" and then start dancing on a revolving stage.  Sometimes the Brelands dressed the hen in costume, but most of the shows  had the hens looking as they do in the picture on the right.  Since chickens were one of the easiest animals to train, this was an act that was often included in IQ Zoos in other parts of the world.

Below is the juke box from the CHP collection.  The loop that the chicken pulled and the interior of the box are visible.  Read more details in the manual. 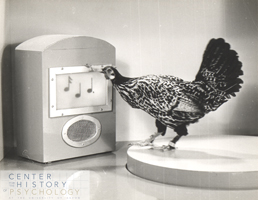 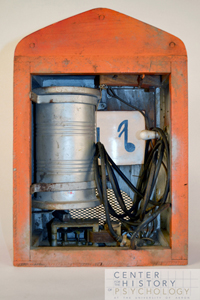 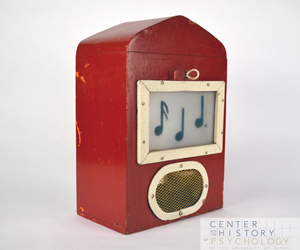 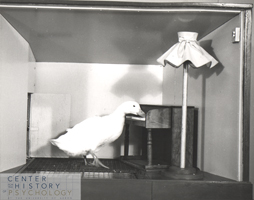 The Piano Playing Duck was one of many exhibits that used a piano.  There was also a piano playing cat as well as a rabbit.  The piano in the CHP's collection is a Schoenhut piano, intended for use as a toy for children.  The signs of wear and the many scratches on the piano attest to its use. 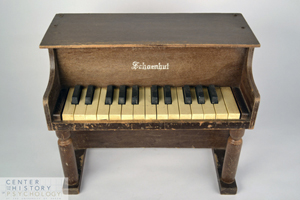 First, the duck turned on a light and then went over to the piano.  As with the other shows, once the appropriate amount of money had been deposited into the box, a signal was given to the duck to start performing a trained routine, using its beak to tap the keys.  The duck would then receive a small amount of food, and go back into its resting place until someone deposited more coins to see the show again.  Read more in the manual for this show. 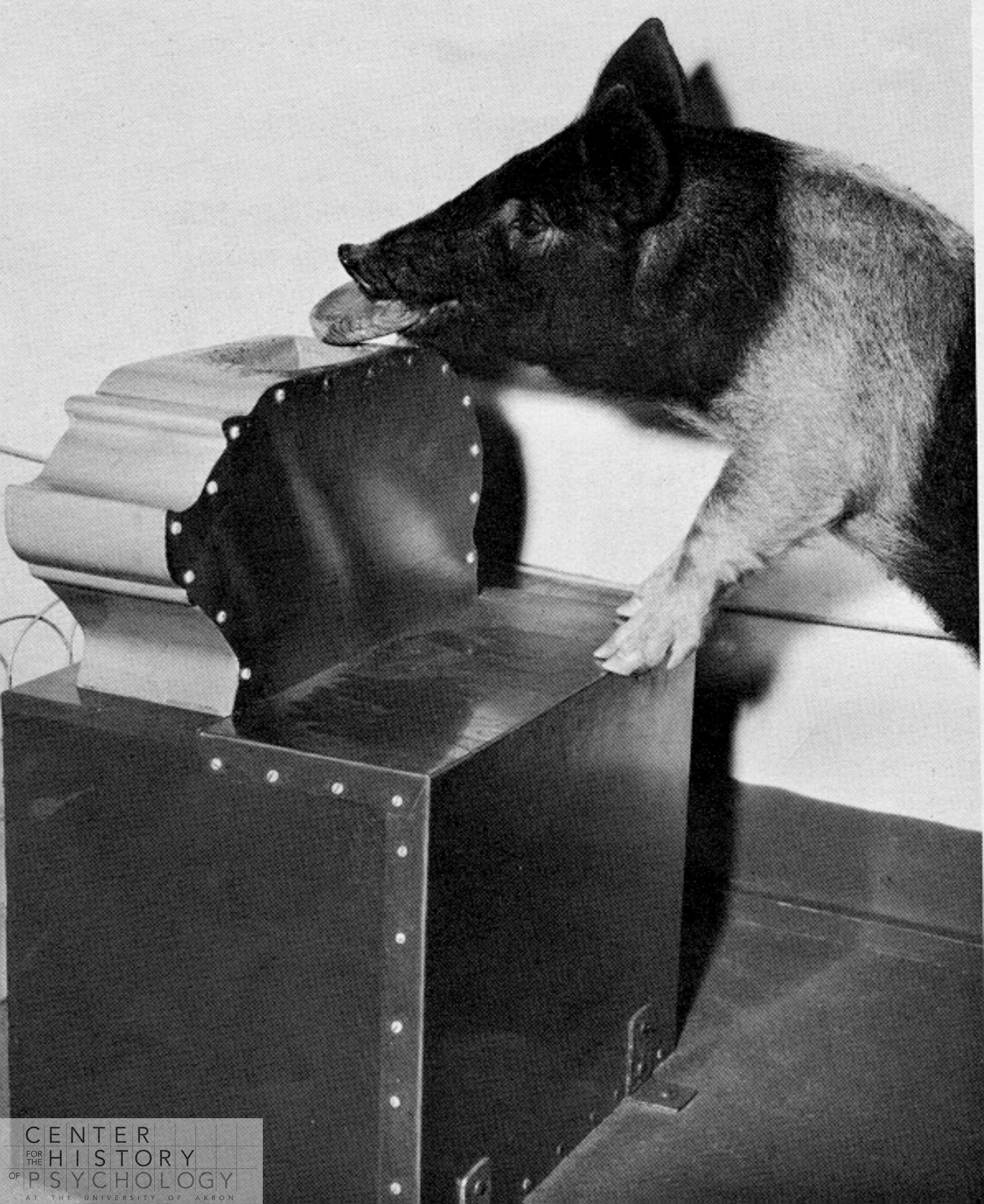 ABE had several animal shows that featured a piggy bank like the one seen here.  Some of those shows starred bunnies, while others had pigs as the main attraction.  This artifact was probably used in one of the shows featuring a rabbit. 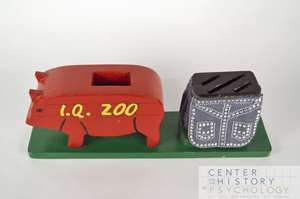 Patient like the Chipmunks by Bob and Marian Bailey, 1994.

ABE was successful at training rabbits to deposit coins into a piggy bank. A popular commercial featured one of ABE's rabbits performing that act.

Video: Patient like the Chipmunks by Bob and Marian Bailey, 1994.  Edited for this exhibit.