It was the Rev. Dr. Martin Luther King Jr. who asked, “Life’s most urgent question is: What are you doing for others?”

Ingenious student engineers from the Biomedical Engineering Design and NASA Robotics teams in our College of Engineering are providing their answer in the form of customized electric toy cars fitted for area youngsters with physical disabilities. The students, representing several academic majors, redesigned the controls, settings and other features of eight off-the-shelf Power Wheels vehicles for children whose physical limitations leave them unable to operate the cars with their factory settings.

The vehicles were modified as part of the Adapt-A-Car workshop put on by Inclusioneers, a Summit County-based nonprofit organization that provides independence and mobility to individuals with developmental disabilities. The children were presented their new toys on March 15 at Lock 3, near the Akron Children’s Museum, during the organization’s Adapt-A-Car Inclusion Day event.

Sophomores Hanna Mackey, of Seville, and Megan Bruns, of Brunswick, contributed work to all eight adapted vehicles, each one needing to fit the specific needs and capabilities of the child who would receive it. Some adaptations had to do with range of motion. For example, limited movement in the arms or legs proved a need for modified seating, steering, or acceleration. Other disabilities required more support in some areas than a standard car would provide (such as leg or forearm support).

The pair consulted with physical therapists to develop the desired adaptations. Some vehicles are now accelerated and steered with a joystick, others are accelerated by buttons on the steering wheel and push-buttons. Desktops with the controls were installed on two vehicles to give an easier reach to the drivers. Seating for the young drivers was customized by Miller’s Rental and Sales, Inc. and Numotion, wheelchair and mobility equipment companies.

“Having this opportunity to help children with disabilities in Akron has been so rewarding and it is great to feel like a part of the community that my university is in,” said Bruns, a second-year biomedical engineering major. “Watching this project help children has shown me that pursuing biomedical engineering is the right track for me. Being able to help solve or better medical problems for people is what I want for my future career and Adapt-A-Car helped me realize that.” 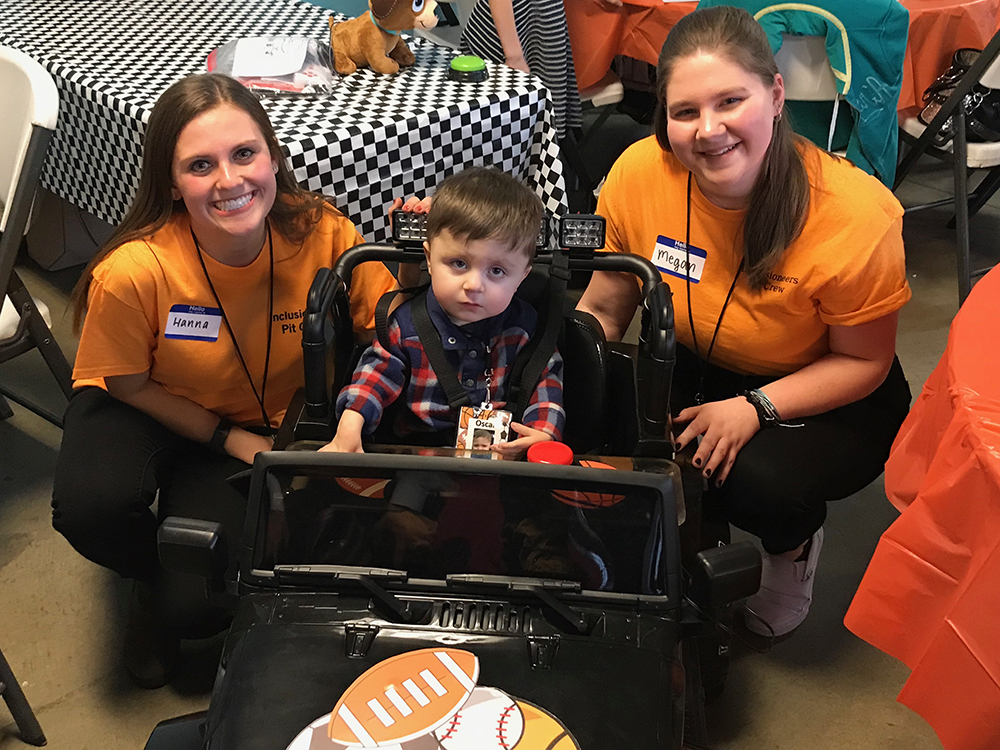 Sophomores Hanna Mackey (left) and Megan Bruns contributed work to all eight adapted Power Wheels vehicles, each one needing to fit specific needs and capabilities. For the vehicle pictured here, they built a desktop with a push-button that controls the vehicle. It was customized for Oscar, seen here with them.

“Working on the Adapt-A-Car team has been one of my favorite parts of my college career so far,” said Mackey, a second-year exercise science major. “This project has helped me realize my passion for rehabilitation and pediatrics, and has led me to pursue physical therapy school upon graduation. I have loved having the opportunity to be involved with The University of Akron and the Akron community as a whole, and am so thankful for the opportunity. This project has not only been fun, but has furthered my development in skills such as communication, work ethic and dedication.”

Putting skills to the test

A group of three students from UA’s NASA Robotics team worked together to customize a Power Wheels “Wild Thing” vehicle, a 360-turning model that features a two-wheeled designed with the operator sitting in a seat between each tire, controlling the vehicle with two joysticks. The “Wild Thing” was adapted for Akron-based Cub Scout Pack #3310 to be used by any scout with a physical disability.

The team gutted the vehicle’s controls system and modified it into a 3D-printed single joystick control from the original dual joysticks for easier control. The team even developed its own programming for the vehicle with additions that included a proximity alarm (with its own on/off switch) to warn the user and others if a collision may occur and a speed control dial to speed up and slow down as needed. A five-point harness was installed to the modified 3D-printed seat donated by Fisher-Price. 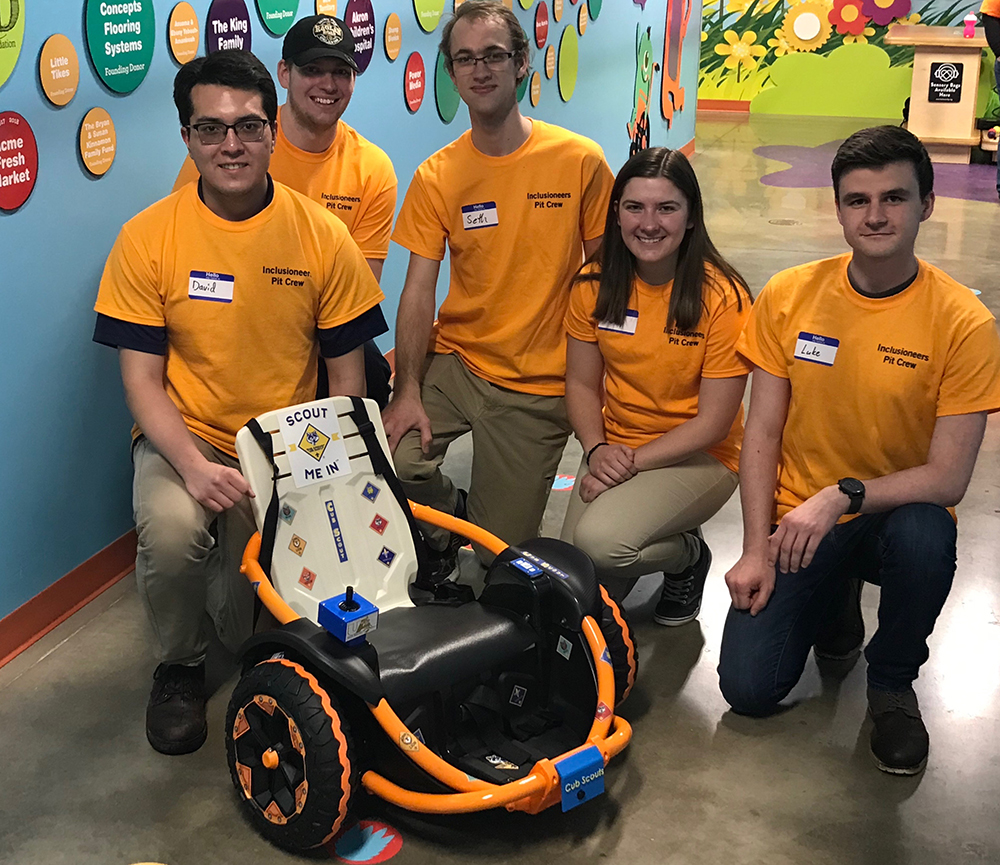 Team members David Klett (left), Shawn Sharratt, Seth Carpenter, Kelly O’Neill and Luke Schmitt adapted a Power Wheels “Wild Thing” vehicle, a 360-turning model that features a two-wheeled designed with the operator sitting in a seat between each tire, controlling the vehicle with two joysticks. The “Wild Thing” was adapted for Akron-based Cub Scout Pack #3310 to be used by any scouts with a physical disability.

Klett said he enjoyed being able to directly use the skills he learned in the classroom to help someone else.

“I learned that I can directly use my engineering skills to help someone else, and I believe as engineers, we have a duty as the builders/innovators to contribute directly to the benefit of our local community, not just our own checking accounts.”

Carpenter, who was in charge of logistics for the team and served in an advisory role, said the project was “a great experience as an opportunity to be able to reach out to the community.”

“Throughout the development of the project, I was blessed to gain a better understanding of the problems that are faced by those less fortunate than myself,” he said. “After all the work that the team put into the project, there are times where you still wish you could do more.”

Inclusioneers has been partnering with UA students on various projects since 2015, and since 2017 for the Adapt-A-Car workshop. The organization was founded by UA alumnus Mike Firtha ’76. The Adapt-A-Car program involves mechanical and electrical adaptations to off-the-shelf Power Wheels cars designed for typical children ages 1-6 years old. The cars are modified to account for the unique mobility requirements of children with developmental disabilities.

“Inclusioneers has a charitable mission to provide inclusive engineered solutions to help the disenfranchised enjoy the same facilities, events and activities that are commonly taken for granted by the mainstream population,” said Firtha.

Learn about other collaborative projects between UA students and Inclusioneers online, including such as a tandem wheelchair and an adaptive bicycle with 3D-printed parts.