Our Speech and Debate Team took top honors at the Ohio Forensic Association State Championship Tournament, held Feb. 16-17 at Bowling Green State University. With a score of 412, the team won its third consecutive state championship in the overall sweepstakes. Second place, Cedarville University, finished with 89 points, and third place, BGSU, with 86, rounded out the top teams.

“All 11 of my students contributed significantly to our third consecutive OFA State Championship,” says Mark Rittenour, team coach. “I'm so proud to have the opportunity to work with University of Akron students who are committed to excellence and represent our university with such high academic and personal integrity. These are top students, ones who are ambassadors for UA, but also exemplary citizens in the national forensics community. They breathe new life into the campaign, #whynotAkron.” 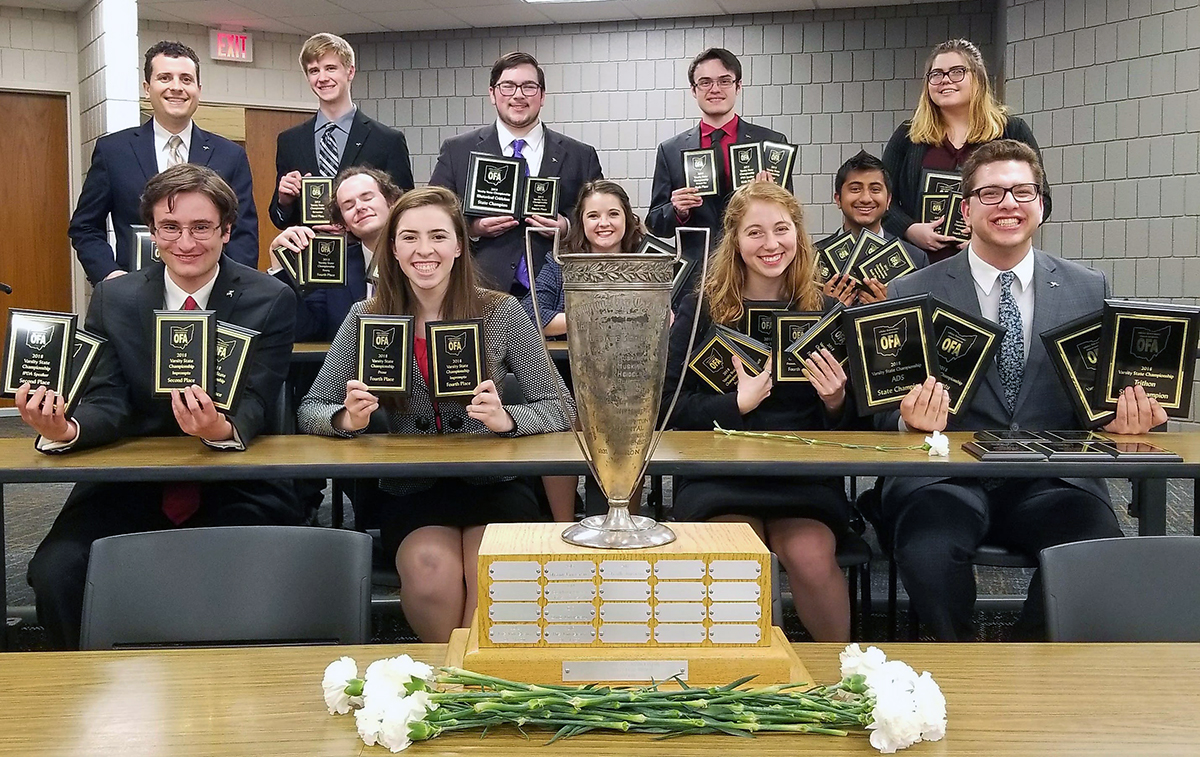 Seated above in the front row, from left, are Nicholas Golina, Lydia Mainzer, Angela Perretta and Nathan Hill. In the middle row, seated, from left, Ethan Plaster, Taylor Mills and Adithya Rajiv. In the back row, standing, are Coach Mark Rittenour, Gavin DeMali, Graham Hess, Ryan Longoria and Kat Humphries.

Rittenour, a professor of instruction in the School of Communication, received the 2018 Ohio Forensic Association Educator of the Year Award. This is the first time since 2012 that the honor had been awarded.

The first and second place finishes of Nathan Hill and Angela Perretta in persuasive speaking place them as the top two persuasive speakers in the state. They have qualified to represent Ohio in the Interstate Oratorical Association national contest, to be held in late April in Monmouth, Ill.

The individual award winners are as follows:

Team open to all majors

The Speech and Debate Team, housed in the School of Communication in the Buchtel College of Arts and Sciences, is a co-curricular program offered to all undergraduate majors. In preparation for intercollegiate competitions, participating students learn critical thinking, writing and speaking skills. Team members travel to regional, state and national tournaments where they are given a forum to showcase their art, passions and ideas for civic engagement. The team provides its students with academic enrichment, national networking opportunities and competitive victories. During the past decade, the Speech and Debate Team has earned more than 45 individual state championships, eight team titles in the Ohio Forensic Association and six top 10 team placements at national tournaments.