Flying under the radar

An airplane carrying 96 passengers, including President of Poland Lech Kaczyński, the First Lady, nine top NATO generals and dozens of Polish dignitaries crashed near Smolensk, Russia, April 10, 2010, killing all aboard. The Russian government says the crash was an accident, but University of Akron professor Wieslaw Binienda, chair of the Department of Civil Engineering, disagrees. Binienda has spent the past two years combing details of the final report from the Russian investigation into the Smolensk crash, uncovering contradictions and discrepancies in the report and backing his findings with scientific evidence. 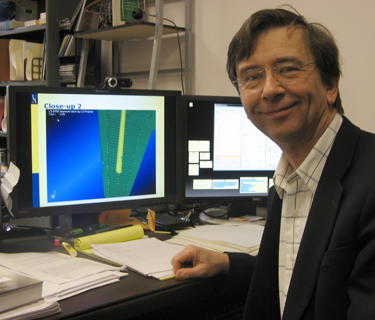 Professor Wieslaw Binienda developed a computerized simulation of the aircraft-crash scenario based on the facts and data presented in the official report.

Restricted entry to the crash site, victims' bodies in sealed coffins, and the aircraft's undisclosed black boxes raised a disturbing red flag for Binienda, and prompted him to voluntarily investigate the Russian findings.

One particular discrepancy caught Binienda's attention. The report indicated that the plane, after losing one-third of its wing when it snipped a birch tree, flew upward 30 meters, and then inverted and crashed, killing everybody aboard.

"I could not agree with this scenario. An airplane without a wing crashes. It can't fly upward after losing a major part of the wing," explains Binienda, who also serves as editor-in-chief of the Journal of Aerospace Engineering.

Binienda developed a computerized simulation of the aircraft-crash scenario based on the facts and data presented in the official report. For his analysis he used the same technology employed by NASA to analyze the Space Shuttle Columbia disaster. His results contradicted conclusions made in the official Russian report. Binienda's simulation of the wing colliding with the birch tree demonstrates that the wing could not have been broken by a birch tree. In his simulations, Binienda analyzed various scenarios, including the worst-case scenario that assumed a larger diameter and higher density of the tree than officially investigated.

Binienda and a group of international experts have been working with the Polish Parliamentary Commission for the Investigation on the Smolensk crash. On March 28, 2012, a team of experts, including Binienda, presented their findings to the European Parliament. These findings challenge and invalidate the official conclusions. Binienda's scientific analysis will present the platform for his May 21 keynote address at a Polish-French symposium at Warsaw Technical University in Poland.

The controversy surrounding the investigation into the Smolensk crash, its high-profile victims who died while flying to commemorate the 70th anniversary of the Katyn mass murder of the Polish elites, and Binienda's findings continue to raise questions about the crash. Binienda says he would like to see a new independent investigation committee formed to reinvestigate the crash.