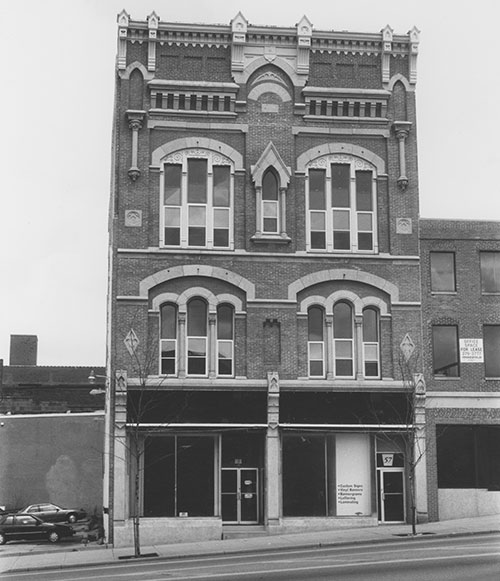 One hundred years ago this September, the Akron Law School welcomed its first class of 30 part-time students to its space in a handsome but modest three-story building that still stands at 57 East Market St. In 1959, the school merged with The University of Akron, becoming what is now The University of Akron School of Law.

Over the course of the 2021-2022 academic year, Akron Law and its alumni, students, faculty, staff and friends will celebrate the school’s centennial. The festivities begin with a Kickoff reception on Wednesday, Sept. 8, at the Sheraton Suites Akron Cuyahoga Falls.

The celebration will continue with special events throughout the year. On Friday, Sept. 24, the U.S. Army Court of Criminal Appeals will hear oral arguments at the McDowell Law Center, followed by a question-and-answer session. On Tuesday and Wednesday, Oct. 26-27, the Supreme Court of Ohio will hear arguments on campus. On Saturday, Oct. 23, Judge Joan A. Larson of the United States Court of Appeals for the Sixth Circuit will deliver the centennial keynote address.

Visit Akron Law's centennial page for information about these and other centennial-themed events and to view a historical timeline slideshow.

During its history, Akron Law has provided talented leaders for law firms, businesses and communities in Greater Akron, the state of Ohio, and across the country. Its more than 8,500 graduates have worked in large and small law firms, corporations, nonprofits, and government agencies in 50 states and 14 foreign countries. 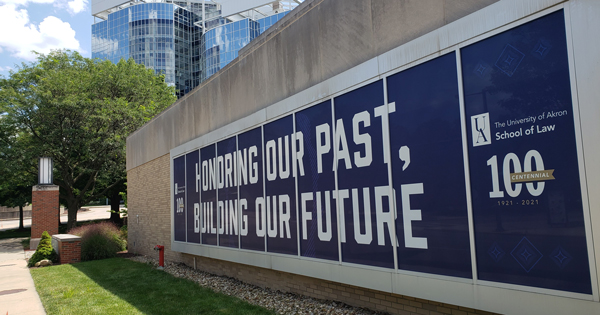 Akron Law graduates have served in the U.S. House of Representatives and in the legislatures of Ohio and other states. Nearly 200 have found distinction as members of the judiciary, including on the Ohio Supreme Court, the U.S. Court of Appeals for the Sixth Circuit, the U.S. District Courts, and the courts of at least 14 states.

The school has hosted five U.S. Supreme Court justices, one U.S. president, and scores of legal luminaries. It has long been nationally recognized for its clinical law, trial advocacy and intellectual property law programs, and for its Center for Constitutional Law.

And it has held true to the vision of its founders.

To train worthy men and women

As related in a 2015 Akron Law Review article by Richard Aynes and Margaret Matejkovic (“The Akron Law School: The Early History of The University of Akron School of Law”), the school’s founders declared in 1921:

“It is the purpose of the Akron School of Law to train worthy young men and women to acquire a thorough knowledge of law whose circumstances would not permit them to leave the city without too much difficulty, otherwise resulting in added expense of time and energy.”

A catalogue from a few years later defined the school’s intention to produce lawyers who might affect “the destiny of the city and the nation.”

At the time, most aspiring lawyers were still “reading law” under the guidance of individual mentor attorneys. But that was not an option for prospective lawyers who were already otherwise employed during the day, which led to the rise of part-time evening law schools across the nation. For Summit County residents, the nearest such law school was in downtown Cleveland, reachable from Akron in about 2½ hours on the electrified Akron, Bedford and Cleveland Railroad (also known as the Alphabet Railroad), which operated until 1932.

The demand for trained attorneys was certainly there. In 1921, Summit County had fewer than 200 lawyers to serve a city of 210,000 people and 250 manufacturing businesses.

The two founders of the Akron Law School – Clark Neale and Paul Short – were no doubt aware of this opportunity. Both held law degrees; Neale had commuted to the Cleveland area to earn his law degree from Baldwin College in Berea while working at a business college in Akron.

A high school diploma and $100 in tuition were the only requirements for entry to the new law school. The Akron Law School conferred the L.L.B. degree. (The J.D. did not become the standard degree among U.S. law schools until the late 1960s.) At a time when women were barred from many law schools, the Akron Law School sought to serve “several classes of men and women…” These included those who were studying law with a mentor but wanted some assistance beyond that; those who did not want to practice law but wanted to know law “as an aid to commercial life”; and those “willing to sacrifice his pleasure and devote practically all his leisure time in mastering the knowledge necessary to proficiency in the practice of law.”

Highlights of our past century, and the histroy of Akron Law.

Little is known of co-founder Short, who is believed to have died in 1923, but Neale would serve the school until 1941 as assistant dean and then dean. The founders’ most inspired contribution, however, may have been recruiting Judge Charles Grant to serve as the school’s first dean. Grant gave the school instant credibility, as well as its first law library from his personal collection.

Though he came from humble beginnings – he was born in 1846 in New Haven, Conn., the son of a shoemaker – Judge Grant had risen to become one of the most prominent citizens of Summit County. He was able attract leading members of the Akron bar to serve on the all-part-time faculty -- people whose names are familiar to this day, such as his former partner Lisle Buckingham; Ralph Burroughs, brother of Lisle Buckingham’s future law partner; and Ohio Edison’s young legal counsel and future Presidential candidate Wendell Willkie. Grant was 75 years old when the school was founded, and he would serve as dean for nearly eight years until his death at age 83.

By 1928, there were more than 200 students in the Akron Law School. Thanks to Grant, Neale and others, by 1936 the school could boast that its alumni included not only practicing lawyers but also members of the legislature, judges, mayors, and other public officials. It was estimated at the time that 40% of graduates worked in law and 60% in business.

Diversity from the start

The Akron Law School stood for diversity from the start. Aileen McMurray Trusler, a member of the first graduating class, became the first woman to work as a lawyer in the Summit County Prosecutor’s Office. Photos from the early years make clear that other women followed in her path.

Another pathbreaker – Mary Cacioppo ’45 – formed a partnership with Patricia O’Donnell in 1947 that is thought to have been the first all-female law firm in Akron. She went on to become a referee in the Domestic Relations Court and then a judge of the Ninth District Court of Appeals.

The first Black graduate was Samuel C. Easley in 1926. He practiced law for 37 years at the Goodyer Tire & Rubber Company. Another early Black graduate, Alexander Young Russell ’44, placed second in the Ohio bar examination out of 600 applicants. He started out as a solo practitioner, and later in life devoted much of his time to real estate. By 1947, there were enough Black attorneys in town to prompt 15 of them to form the Akron Barristers Association. 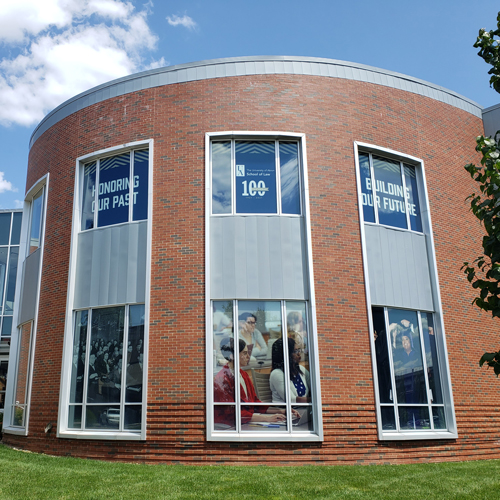 Saved by the merger

Over the course of its 38 years, the Akron Law School graduated 603 men and 23 women, including a significant portion of the city’s business, legal and civic leadership. The largest class was in 1930, with 34 graduates.

In the late 1950s, the school’s board of trustees envisioned a bright future. Plans to seek accreditation from the American Bar Association were made public. The first alumni association was formed in 1958, and the first alumni dinner was held that year. Enrollments were in the 125-150 range, although attrition was high, with graduating classes in the low 20s between 1955 and 1959.

To better position itself for ABA accreditation, the school hired its first full-time faculty member in 1955. Two years later it added three full-time faculty members. But at some point, the leadership realized that the school could not afford to meet the new ABA standards on its own. At various times, consideration had been given to merging with either Kent State University or The University of Akron. Now, in order to ensure that a quality legal education would be available in the city, a merger was negotiated with Akron.

Meeting the new requirements following the merger plunged the school into an operating deficit that was resolved when Akron lawyer C. Blake McDowell made a personal gift equivalent to $1 million today.

In 1966, the new Akron Law welcomed the first full-time day division, beginning a rapid transition to a primarily full-time program. This period also saw the establishment of clinical programs and the debut of the Akron Law Review. In 1974, with Akron Law’s enrollment at nearly 600 students, the University dedicated the new C. Blake McDowell Law Center on the site where the law school stands today, across the bridge from the Summit County Courthouse.

In the 1980s, the school emerged as one of the top trial programs in the country, a distinction it retains to this day. An intensive Summer Trial Academy is the centerpiece of the comprehensive advocacy curriculum. Akron’s trial advocacy teams have won 23 national and regional titles and were accorded a No. 5 national ranking in the Fordham University School of Law Trial Competition Performance Rankings for 2018-2019.

1994 brought the founding of what is now the Miller Becker Center for Professional Responsibility, a nationally recognized academic center dedicated to enhancing public trust and confidence in the legal profession and the judicial system. In 2019, Center Director and Professor of Law Jack P. Sahl received the Ohio State Bar Association’s annual award for ethics and professionalism.

In 1996, Akron Law solidified its reputation in another area with the establishment of what is now the Center for Intellectual Property Law & Technology. It was the first such center in Ohio and one of only about a dozen nationally at the time. The center’s first permanent director, Jeffrey Samuels, spent the next 16 years extending the center’s reach and influence, which now enjoys national scope. In 2019, Samuels was inducted into the IP Hall of Fame.

Throughout the succeeding years up until the present day, Akron Law has continued to enhance its curricular offerings, the opportunities it affords students, and its service to the community. It has attracted highly regarded faculty dedicated to providing excellent teaching in the classroom, engaging in influential scholarship, and offering meaningful service and leadership in the broader community.

More than a decade ago, law school and university leadership were already looking ahead to the facilities that would be required to keep pace in the future. Thanks to years of planning and saving, and to the generosity of hundreds of private donors, the completely renovated C. Blake McDowell Law Center building, including a new 12,350 sq.-ft. addition, opened in September 2017. The $21 million renovation was funded debt-free. Akron Law students and faculty now enjoy one of the most technologically advanced law school buildings in the nation.

True to its founding mission, Akron Law continues to offer a legal education that is innovative, practical and affordable. With a strong base and a continuing emphasis on diversity, inclusion, and equity, The University of Akron School of Law is well-positioned for another century of service.