A commemoration of the accident to Phineas Gage was held in Cavendish on the 150th anniversary of the event in 1998.  Its program was drawn up by the Cavendish Chamber of Commerce, the Cavendish Historical Society, and the Cavendish Daughters of the American Revolution.  They decided the Anniversary should be marked over the weekend of the 12-13th of September, 1998 (the accident itself having taken place at 4.30 p.m. on Wednesday 13th. September, 1848).

On 26th. May, 1998, at the Cavendish Town office, the Governor of Vermont, Dr. Howard Dean, read a proclamation passed by the Vermont State Legislature. The proclamation noted Phineas Gage's survival of his devastating brain injury, went on to stress the role of the brain and the need for extending knowledge of its functions, and noted that a series of special educational events focusing on the importance of the brain were to be held in Cavendish on 13th. September, 1998. It therefore proclaimed that day as Phineas Gage 150th. Anniversary Commemoration Day in Vermont. 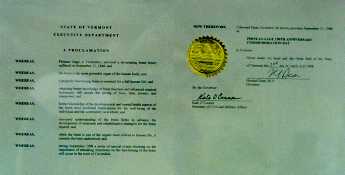 The commemoration events included an exhibition arranged by the Cavendish Chamber of Commerce in which Phineas Gage's skull and tamping iron (on loan from the Warren Museum at Harvard Medical School) and photographs, drawings, and publications relevant to Gage's accident were displayed.

Tours were conducted by the Cavendish Historical Society to Dr. Harlow's house and the church near it, and the sites of Mr Joseph Adams' tavern where Gage recovered, of the cabinet maker's shop where his coffin was prepared, and the accident itself, some 0.75 miles (1.2 kilometres) south of the town.

A special commemorative envelope was issued by the Cavendish Chamber of Commerce and the US Postal service made available a special Phineas Gage cancellation based on Harlow’s illustration of the skull. Envelopes could be cancelled at a booth on the Town Green.

The John Martyn Harlow Frontal Lobe Symposium was held at the Okemo Mountain Lodge Resort, Ludlow, Vermont on Saturday, 12th. September. The Symposium was under the auspices of The World Federation of Neurology, the International Society for the History of the Neurosciences, The School of Psychology, Deakin University, Victoria, Australia, and The Cavendish Chamber of Commerce.

The Symposium program was as follows:

Lunch and visit to the exhibition at Cavendish to see Gage's skull and the tamping iron.

Session 3, 2:15-3:45. Diagnosis and rehabilitation in cases of frontal damage

Day 2 of the Festival of History Program concluded shortly after the unveiling with an informal walk to the site of the accident.

More information about the history of Cavendish is available at the town of Cavendish website and by using 'Cavendish' as a search term on the Vermont State Department of Tourism web site.