I: The Place of the Accident

Phineas Gage's accident took place only a short walk of some 0.75 miles (1.2 kilometres) south of Cavendish, along the track of the old Rutland and Burlington Rail Road (now the Green Mountain Rail Road). Unfortunately, a precise location cannot be given for it. It is in the vicinity of the 100 M point on this detail from the Map and Profile of the Rutland & Burlington Rail Road (below) published in January 1848 by William B. Gilbert, Chief Engineer of the R&BRR, and just before Duttonsville was renamed Cavendish. Local tradition has it that it was in the second of two cuttings or cuts along the track, but present day Cavendish residents cannot agree whether ‘second' is to be counted as one moves away from the town or toward it.

The first cutting or cut that one reaches in walking from Cavendish (a, below) is almost exactly 0.75 miles from the town. It is some 220 yards (200 metres) long with walls about 10-20 yards (9-18 metres high). The distance of this cutting from the town matches the contemporary descriptions of the distance Gage travelled in the ox-cart to Adams' Inn or Tavern.

The second cutting (c, below), also walking from Cavendish, is about 150 yards (140 metres) further south of the first. At the most southerly point of this cutting, on the eastern side, low down near the rail tracks, can be seen some large potholes. In the relatively flat space between the two cuttings on the western side of the tracks, the remains of a lime kiln can be seen (b, below). These two features match the only account we have that gives details of the location. That story comes to us from Walton H. Green who retold in 1936 what he had been told thirty years earlier by Christopher Goodrich, then 82, the driver of the ox-cart that took Gage to the tavern. Green said "The accident took place at the second cut south of Cavendish where many potholes in the rock give indisputable evidence that black river once went this way near where Roswell Downer built his lime kiln later."

However, from the context of these remarks, especially Green's implying that the kiln was close to the second cutting, rather than between the two, it could be argued that Green is giving a general location rather than the specific site of the accident. You may therefore choose whichever of the cuttings appeals to you.

After the accident, Gage was taken to Joseph Adams' Inn or Tavern where the Drs. Harlow and Williams examined his wounds, and dressed them. Over the next ten weeks Harlow ministered to him there. Although the building no longer exists, we know where it was.

Adams ran his Inn or Tavern in premises owned by Samuel Dutton, who was himself an innkeeper. The location of Adams' Inn is given by two facts. First, on Hosea Doton's 1855 map of Cavendish (below), a building labeled 'S. Dulton's Hotel' (sic) is situated on the north side of Main Street to the west of Depot Street. Second, this building is opposite where Walton H. Green also said that Christopher Goodrich had driven Gage in his ox-cart to where he "boarded at the tavern, or hotel, which then stood directly across the road from where the solier's (sic) monumentiis (sic) (where the Aura Austin house now stands)."

Walton H. Green tells us "Thomas Winslow, who had a cabinet shop below where Floyd Gay's garage is now situated, was called in to measure Gage (as was the custom in those days) and he made a coffin for him in readiness to use."

Although Winslow's name does not appear on Hosea Doton's 1855 map, the building he used does seem to be marked on it as 'Cabinet Shop.' That building no longer exists, but it was located approximately where the Cavendish Town garage now stands, on the south side of Main Street but further west again than the Soldiers' Monument.

Dr. Harlow says he began his work in Cavendish in January 1845 (although he seems not to have purchased the practice from Oliver Chamberlain until 1846) and he sold this practice to Dr. Hazelton in 1857. Hosea Doton's 1855 map shows only Harlow's house but a later map shows both that house and a surgery or office belonging to Hazelton. Harlow's house was in Main Street, about 0.25 mile (400 metres) east of the junction with Depot Street and on the western side of Chapman Street. The Stone (Universalist) Church was on the eastern side of Chapman. Hazelton's surgery, perhaps also used by Harlow for the same purpose, was then the second building to the west of the house.

Phineas Gage's accident is commemorated permanently in the cast bronze plaque shown here. It was unveiled in Cavendish, Vermont, on Sunday 13th. September, 1998, the 150th. anniversary of the accident 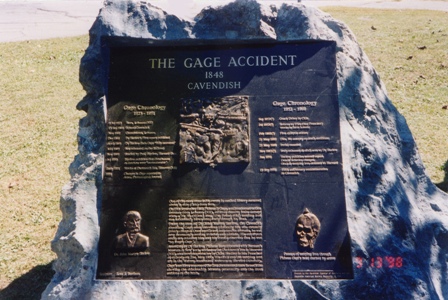 The plaque is 1m x 1m and is mounted on a large block of Vermont's unique green marble sited on Cavendish Town Green. The unpolished marble shows traces of the drill holes and blast marks from its quarrying. The plaque includes a relief map of Cavendish, a short account of the accident and its significance, a chronology of Phineas Gage's life, a representation of the damage to his skull, and a portrait of Dr. John Martyn Harlow.

The bronze was designed by Dr. Ross Bastiaan, an Australian who has made nearly 200 plaques, mainly commemorating battles in which Australian forces were involved in the two World Wars. He was commissioned by the Australian Government to execute a set of plaques commemorating the 100th. Anniversary of the Federation of Australia. The Gage bronze was cast and finished by the Arrow Foundry of Cheltenham, Victoria, Australia.

The cost of the plaque was met by donations from: