In this video, Ohio Lt. Gov. Mary Taylor, Chancellor John Carey, and State Sen. Frank LaRose praise The University of Akron's Veterans Services for its outreach to Ohio's veterans, and they describe their efforts, working with the Ohio legislature, to replicate UA's success across the state. 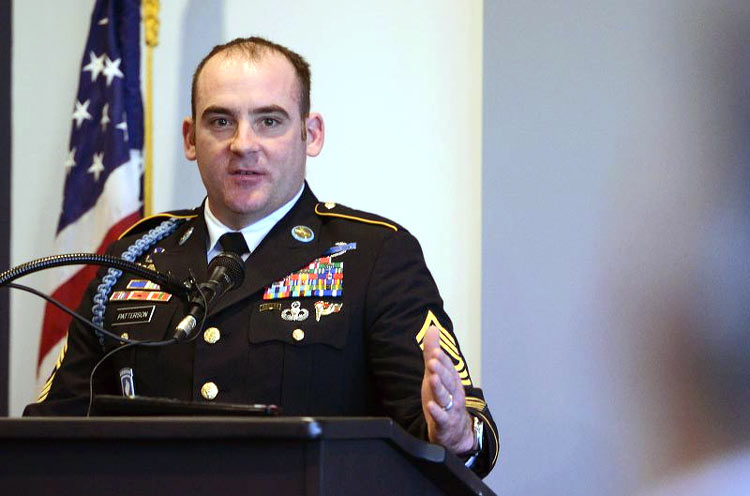 Ohio Lt. Gov. Mary Taylor and Ohio Board of Regents Chancellor John Carey were on campus Monday to see firsthand how The University of Akron has become a leader in providing comprehensive academic and support services to veterans as they prepare for their next careers. Their visit also served as the occasion for two important announcements that will further strengthen veterans services — UA will now have its own American Legion Post, and a new scholarship has been established to help veterans finish their degrees.

The visit to the UA campus was sparked by a desire to see UA’s best practices, which have earned the Military Friendly Designation from G.I. Jobs magazine for five consecutive years, replicated at campuses across Ohio.

UA's services seen as a model

With about 900,000 veterans — Ohio has the sixth-largest population of veterans in the U.S., — Gov. John Kasich and others in state government are putting a big priority on services for this group. At the top of the list is making the transition from military to civilian life as smooth as possible for veterans, especially for those who choose to use their education benefits to earn college degrees.

“Our veterans have great skills to meet any of the demands in our job market today,” noted Taylor, a UA alumna, during an early afternoon press conference in Musson Military Veterans Lounge in InfoCision Stadium with UA administrators, students and other state officials. “We need to replicate what you have done here so that we can streamline the process for transferring experience and training into college credit across all campuses so that our veterans can transition to working an economy that’s growing.”

Veterans and the economy

When Carey took his turn at the podium, he noted that returning veterans are “important for the economic strength of our state. In Ohio currently, only slightly more than one-third of our current population has a postsecondary credential. By 2020, we will need that number to be 60 percent in order to fulfill Ohio’s future workforce needs. Veterans are proven leaders and it’s important that we give them as many opportunities as possible. Not just for them and their families, but for our state.”

State Sen. Frank LaRose of Senate District 27, who chairs the Public Safety, Local Government and Veterans Affairs Committee, said that the efforts made on behalf of veterans benefit everyone.

“Our veterans provide a unique set of experiences to share with their classmates in classroom discussions,” said LaRose, a 10-year U.S. Army veteran, “It’s a very good thing not only for the University, but for our veterans as well. I’m just so proud that our University, right in my hometown, is leading the way on this in the state of Ohio.”

Also speaking at the press conference were two veterans —a current student and an alumna  — who shared their experiences at UA.

Jay Musson, speaking on behalf of the R.C. Musson and Katharine M. Musson Charitable Foundation, delivered the announcements that will result in even more robust services for veterans on campus.